IT APPEARS clearly that the fate met by the United Nations special envoy to Somalia early this year awaits Special Representative of the United Nations Secretary General in Libya Ghassan Salame, because both officials have not been neutral which is required in playing the role of peacemaker among warring parties.

With his action, Salame is pushing Libya towards the same situation as Somalia.  This will make Libya a failed nation by all standards, especially after the disappearance of institutions; thereby, allowing tribes that have become stronger in the past eight years to replace it.

In the early 1990s, the United Nations tried to perform its role in stabilizing Somalia but to no avail.  The country fell into civil war which has yet to end.  The picture of the international organization is not different from the disputes it is trying to resolve, considering the incessant failures at every point.

Today in Libya, the same is happening to Salame when he violently criticized the Libyan National Army and Marshall Khalifa Haftar.  At the same time, he is globetrotting across Europe to promote the government of Fayez Alseraj – a government confirmed to be controlled by militants.

The funny aspect is the position of the European Union in support of Alseraj, while the country announced that it is fighting against terrorism which has been consumed by its own fire in the past few years.  How can the union recognize a government which consists of the ‘Brotherhood’ and other extremist groups, and protected by al-Qaeda and DAESH; while condemning the attack of the National Army on these groups?

There is no better interpretation for this than the game of regional and international interests in that territory.  The blood of Libyans is its fuel and its basis is about preventing the strong national government from rescuing Libya out of the mess in which it has been enmeshed since 2011.  The powers and militants, as well as the supporting nations behind them, are struggling to take control of natural resources in the country which is geographically massive and has low population.

If it is really striving to end the war and to counter terrorism, it would have supported the National Army in the ‘Flood of Dignity’ action to wipe out terrorist militants.  It would have ousted the government of Alseraj to cleanse Libya of terrorists and human trafficking gangs in order to stop threats to international stability and peace.

Share
Previous To wake up late from Awakening is better than not waking up at all
Next Social media has been really terrible for my gen: Gomez 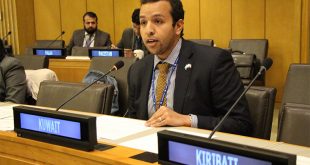 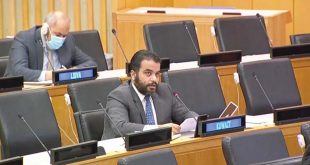 Haftar taking Libya back from terrorists

WASHINGTON, Oct 9, (Agencies): The US ambassador to the United Nations, Nikki Haley, is resigning …