Rumours of scarcity in water can make people die of thirst

THERE are misconceptions that govern the formulation of strategic financial policies, especially for societies and countries, while billions of dollars are spent on general recreational activities, sports of all kinds and other fields for the sake of fame, showing off and reaping commercial profits. Scientific research, on the other hand, is at the bottom of priorities – even in those countries that boast of allocating huge budgets for research; such budgets at best hardly exceed five percent.

This imbalance is evident, for example, when comparing a footballer who earns tens of millions of dollars and commercial companies earning only billions with a researcher who spends his life in scientific research for the benefit of mankind and only gets peanuts.

Indeed, it is unjust distribution of spending that causes many crises on the humanitarian level. Countries spend hundreds of billions of funds every year on armament and militarization, while half of that sum is not spent on health affairs; hence, finding themselves in a state loss and confusion due to its inability to deal with crisis at a time of distress, as we are witnessing today with the current epidemic that continues to slash nations apart and isolate them from each other.

It seems that the world has not learnt from the lessons of the past, as if the memory of the people suffers Alzheimer’s. In quick surf of history, we discover that the planet faces an epidemic every hundred years, and this has been the case even before the Common Era – starting from the plague of Rome to the Spanish flu that spread in 1918, which recent estimates suggest that about 500 million people were infected and over 50 million of them perished.

This was the last pandemic in the modern era and it was supposed to constitute an incentive for nations to seek more scientific research to prevent such epidemics. Unfortunately, that never happened. The world in fact indulged in what increases the affliction of hundreds of millions of people with epidemic diseases.

Today, nations and people are living in hysteria due to the new coronavirus pandemic, as if no one among the tens of millions of researchers warned against it. That is why governments appear to wake up suddenly to find solutions, although we could have surpassed this horror.

Is the current health crisis intended for reviving the game played by the companies in delaying to put the drugs for fighting cancer and other incurable diseases in the market or putting very high prices on them, so that no one can afford, while they market other products that increase the lifespan of diseases with the aim of achieving profits?

Indeed, there is a game of greed at the expense of people’s health, unlike the game of intimidation of wars and threats, which only the companies that sell weapons benefit from.

This prevailing health terror is no different from what was experienced in 1929 when the United States of America fell into the Great Depression, as an estimated three quarters of the crisis was caused by the fear of traders in the stock market, as is the case with global stock exchanges whose indicators record severe losses on a daily basis.

Concurrently, there are people who are surprised with the fall of oil prices, for example, not realizing the demand for oil has fallen due to the closure of factories and suspension of shipping movement; coupled with air, sea, land and social isolation in many countries. However, the demand will return to normal if the situation returns to normal.

There is a story a doctor told about the effect of panic on the people, saying: “We had a patient who was in need of open heart surgery but panic overwhelmed him, and his family observed that he might die even before his admission to the operation room. So, the family decided to seek the expertise of a psychiatrist who disguised herself as a cleaner. The psychiatrist entered the ward under the pretext of cleaning the place and engaged in a conversation with the patient, asking him about the doctor who is supposed to perform the operation on him. The patient told her the doctor’s name, and the ‘cleaner’ commented: ‘He is an excellent doctor but it’s difficult to get a quick appointment with him, although he has performed thousands of operations and all of his patients today are in good health”.

After the conversation, which lasted hours, the patient’s spirits was quickened and he agreed to conduct the operation. He only found out that the ‘cleaner’ was a psychologist upon returning to his room later.

Is the world today in need of a psychiatrist disguised as a cleaner to calm this frenzy or should people remember the old saying “rumors of water scarcity make people die of thirst” so as to get rid of this hysteria and think with a composed mind on how to overcome the current crisis, and prepare to prevent the spread of such devastating outbreaks in the future? 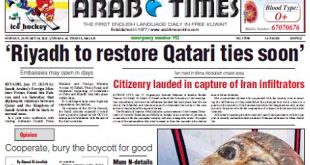