Please … do not lie to us

Logically, the academic and MP Hamad Al-Matar, whose name precedes the titles of ‘Professor’ and ‘Doctor’, is assumed to be the representative of the education facility within the legislative institution by virtue of his ‘experience and position as a professor’.

In his tweet a few days ago, he demanded that the government separate the Ministry of Education from the Ministry of Higher Education. As far as anyone knows, the two ministries have been separated for decades, and the only common factor between them was the assignment of one minister to manage them.

Since the state has separated the two ministries, even in a comical manner, or handing them over to two different ministers, and this is what MP Al-Matar demanded, he is now required to explain and show us how this separation will result in reforming public and higher education, and how the separation between the two ministries will be the gate for development as stated in his tweet.

It may be strange that such tweet was issued by a man who is supposed to be a politician and an academician, but what is strange and most sad is what he told a local newspaper that he objects the government transferring the affiliation of the Public Authority for Applied Education and Training (PAAET) to the Ministry of Education, justifying that it is not permissible to be affiliated with an academic institution that grants Masters and PhDs for the Ministry of Education.

This is inaccurate and a big ‘disgrace’ coming from the mouth of an academic and a deputy holding the title of a doctor and a university professor. PAAET does not award either Master’s or Doctorate, and there is no college for postgraduate studies in PAAET in the first place.

MP Al-Matar also stated that the Education Committee of the National Assembly will not approve the decision to transfer the affiliation of PAAET to the Ministry of Education, and this objection is meaningless, and he has no right to it in the first place.

For your information, the Ministry of Higher Education was, at one point, managed by Professor Ali Al-Shamlan, while retaining his prestigious position as Director-General of the Kuwait Foundation for the Advancement of Sciences (KFAS) and the building of the Higher Education was then rented out, and I believe that the situation is still, after tens of years the same … where false diplomas galore.

We also refer to the statement of Mr Tariq Al-Muzrim, the official spokesman for the government, or the justifier for its actions, that the redistribution of some ministries, such as transferring the subordination of higher education to the Minister of Oil, and the subordination of PAAET to the Education Ministry is based on modern vision.

We hope, along with others, he will brief us on this modern vision which was not originally present 24 hours before the announcement of the formation of the government. So dear, why you lie to us?

We also wonder with others why the Minister of Oil and the Minister of Higher Education bowed, as is said, to the pressure of MP Al-Matar, and transferred the current university exams from paper-based to online?

This crooked decision did not come from the Health Ministry and it will open the way for cheating and will extend the time for answering because of the modest ability of the majority of students to print. 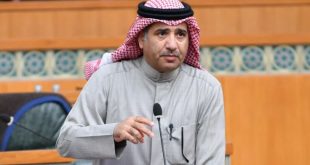 220 scholarships mostly for Expatriates in PAAET