GIVEN that we are accustomed to government confusion, absence of vision, and in fact the absence of the entire Cabinet from its top minister to the last, fear about the future has become our daily bread. It is like we are walking in a tunnel of darkness and we do not know where this void leads us … this is something to which the four governments of His Highness the Prime Minister Sheikh Sabah Al-Khaled have become addicted to.

Because of all this, we turn to His Highness the Crown Prince. This man is firm in his decision, just in his action, keen on implementing the law, and puts some of the concerns of Kuwaitis before his own.

It is a known fact in the administration that negligence and underperformance are the basis for corruption, as it allows an official to overlook the violations of others in order to effect his own violations. Therefore, if he sees a wrong decision, he does not take the initiative to issue a warning or work on reform. Instead, it helps him to exploit the situation for his personal gain. Hence, the mismanagement seen in a number of files does not come as a surprise to us.

We are accustomed to these governments neglecting people’s affairs due to the officials who landed on their posts using “parachute”, or ascended to it on the ladder of parliamentary-governmental deals.

Therefore, the fact that the country is drowning in an inch of rainwater is the biggest evidence of mismanagement, not only in the Ministry of Public Works, but in all the ministries concerned with direct services.

Also, education has been declining for decades due to the policy of “no one but this kid”, which is stronger than the law. Also, The selection of teaching staff is not carried out according to sound standards.

As for the situation of the health sector, catastrophic medical errors serve as sufficient evidence of the lack of a sense of human responsibility, not just patriotism.

In terms of the economic aspect, there is a great catastrophe, as the government did not submit any proposal for laws to develop the country. There is nothing to suggest that it will announce any correct productive plans in the near future due to which changes cannot be expected soon.

In this regard, the main reason is the failure of His Highness the Prime Minister to follow up on the relevant ministers, as well as the absence of initiative in his agenda. This is in contrast to what is happening in all other countries around the world where the prime ministers are in daily contact with their people who inform them about all new developments. The prime ministers then urge the ministers to present plans and programs accordingly.

In fact, in some countries, the proposals made by the elites receive the attention of the entire government. That does not happen here, as it seems His Highness the Prime Minister and the ministers live on another planet. Their only concern is to avoid parliamentary accountability.

Because the media’s mission is to follow up, monitor, shed light on the faults in the path towards reform, and correct the path in case of deviation, and after everything that happened in the past two years due to the lack of realistic plans, it has become clear to every observer that the current government will not be better than its three predecessors.

Indeed, to this day it has not initiated any matter that serves the interest of the country and the people.

This is our country, and we have no other homeland. Therefore, striving for Kuwait to be the best among the neighboring countries in the region is the goal of every Kuwaiti. That is why we place some of these concerns in your generous hands. I hope the message has been received.

Mistakes by the Sabah Al-Khaled governments 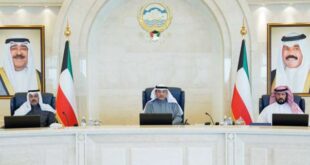