WHAT is Sa’ad Al-Hariri waiting for? What else is the Lebanese Prime Minister waiting for to announce his resignation after he has become unpopular with citizens, politically bankrupt, and nationally suspicious?

All enticing reform prescriptions that he announced jointly and severally with the government ministers from the presidential palace were rejected by the protesters in the public squares. They regard it as nothing but anesthetic injection and analgesics, so they instead responded by expanding the rate of demonstrations and insisting that citizens want the deposition of the system, and that “clean means clean”.

The dining table is left with only crumbs after the impostors looted everything and left citizens to face a miserable fate. It is an irony that the statement made by Al-Hariri before and after approving the so-called reform plan is the same made by his allies in the government, as if they were the official spokespersons of the protesters.

For this, if Al-Hariri were to be truthful with the plan of his martyred father and honest with the responsibility handed over to him by the public, he must get out of the government immediately to conserve what remains of his political influence and popularity. He can at least seize the opportunity of the prevailing situation to exit the chain of agreement he entered over three years ago, based on the dictation of Hassan Nasrallah and under the reality imposed on him by the weapon of crisis. This agreement has produced a hybrid government that is far below the standard expected by the people of Lebanon who have indicated its rejection for the umpteenth time on the street.

As for the statement made by one of the current ministers who said, “the presidential team in the government displays tyranny as if the entire Lebanon is not filled with protests by continuing to reject the real reforms”, it explains why this government has not been able to make any change and affirms its inability to hear the voice of the people, no matter how loud.

It is clear that the protesters are not in crisis, as all methods of intimidation and threat to make them shift ground for the past six days are in futility. There has not been a single record of incident that can distort the image of the protesters, which the world have been following with keen interest as being above board and international observers regard it as an exclusive revolution. This is because there is no use of violence to achieve change, and it is purely peaceful with delight that nearly turns it into a carnival.

At the same time, the government is suffering from the real crisis. It cannot stand for long resisting citizens who do not fear repression, because they believe that the army and legitimate security forces are on their side rather than against them.

Considering these episodes, it amounts to an injustice against the history of his bloc and legacy of his father for Sa’ad Al-Hariri to provide cover for Hezbollah to determine the fate of the country. This is because the latter does not see Lebanon as a country that belongs to all citizens, but as a platform for Iran to market its project in the region.

For this, Al-Hariri should avail himself of the opportunity if he wants his country out of the Iranian control. He should stand on the side of citizens to translate the name of his bloc into reality. How can it be the “Future Bloc” in a country that is currently overwhelming the world with such a revolution while he remains on the ride as one of the buccaneers living in the past caves and riff raffs intimidating free-born in form of Hezbollah, “Amal” Movement and Gibran Basil Bloc?

The Arabs, who care for Lebanon and consider Rafiq Al-Hariri as a man who died for his principles, are fully aware that Lebanon does not have an alternative escape route other than going back to the logic of a single state. They also believe that his son should sustain his political ideology by standing on the side of citizens, and not being a partner to keeping his country as an Iranian farm under the control of a small farmer called Hassan Nasrallah, because this will amount to participating in killing Rafiq Al-Harir again.

Share on:
WhatsApp
Share
Previous Young back in his ragged glory
Next Tezuka updates manga in ‘Barbara’ 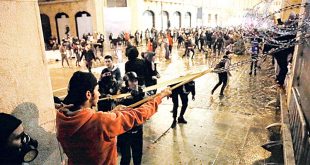 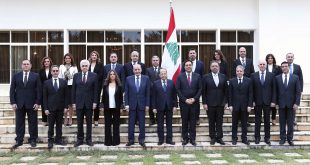 Ahmed Al-Jarallah Editor-in-Chief, the Arab Times HAS the popular revolution in Lebanon become a mandatory …