O government … Desire is what is needed to resolve ‘Bedoun’ case

SOLUTIONS, suggestions, and even royal decrees have been issued to close the Bedoun file, but so far all those initiatives continue to gather dust while on the shelves.

In short, this is due to the fact that the issue is not in the hands of the MPs and the National Assembly, or the Central Agency for Remedying the Status of Illegal Residents and the associations of public interest.

Actually, the case is in the hands of the government, but the latter should have the desire to resolve it instead of leaving the matter in the hands of political, financial and electoral investments.

Due to the absence of the will of successive governments, this issue has turned into a political thorn for Kuwait both locally and internationally.

This is owing to those who put pressure on the executive authority under the pretext of preserving national identity. They forget that the number of Kuwaitis before the Iraqi invasion did not exceed 600,000, but in three decades it has become 1.35 million. Where did this huge number come from?!

Could the process of natural reproduction have doubled the number of citizens in Kuwait during this period?!

All successive governments since 1963 have prevented the issue from being resolved, and citizenship was instead granted to those close to them and those who benefit from them electorally. In fact, all doors were opened for them.

The Central Agency for Remedying the Status of Illegal Residents did not leave any loophole in this file without remedying it, placing all the information in the hands of the government.

Also, its president Saleh Al-Fadalah recently announced that there are 30,000 who deserve citizenship, and they are included in the 1965 census. So why hasn’t the authority facilitated their naturalization? Why would the concerned authorities allow such a crude political-electoral investment in a humanitarian cause?

Most countries in the world work day and night to close the file of illegal immigrants, the last of which was Britain. It bought passports for them from Rwanda and allowed them to travel there. The United States of America has an annual “quota” ranging from 150,000 to 200,000 illegal immigrants who are granted citizenship.

Few years ago, an American woman published in her memoirs about illegal immigration. She wrote that she married 1,400 times, which are sham marriages, and accordingly all her husbands were granted citizenship. On the other hand, a Kuwaiti woman who is married to a non-Kuwaiti man and has children who know only this land as their homeland is not allowed to grant her children citizenship, except in the event of the death of their father or her divorce.

And yet, they slander her with that marriage, and the racism of these people pushes them to deny her a human right.

Before the 1990s and after the liberation, some Arabian Gulf states requested to take and naturalize the Bedoun residents, but our governments refused this without any justification. At the same time, it sparked discord among citizens, as if they like to produce problems intentionally. 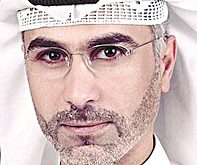