Kuwait 2035 … proceed by the grace of Almighty Allah

THE Kuwait Journalists Association (KJA) graciously hosted us one evening during the month of Ramadan at the Dar Al-Athar in Yarmouk. There we met the Minister of Amiri Diwan Affairs and member of the Supreme Planning Council Sheikh Nasser Sabah Al-Ahmad Al-Sabah. He is also the head of the committee for materialization of His Highness the Amir’s vision “New Kuwait 2035”.

The meeting was also attended by members of the committee for public policies and administration development in the Supreme Planning Council.

During the meeting, Sheikh Nasser Al-Sabah discussed at great lengths the importance of linking the economic and security aspects of the idea behind the project of utilizing the Kuwaiti islands — Boubyan, Failaka, Warba, Miskan and Auha, which are currently almost empty. He also stressed the need for the state to take a form that suits the “New Kuwait 2035” vision.

Furthermore, he insisted on the need for finding new sources to generate income in the future. This is because the income generated from oil will not be able to cover the salaries and allowances offered to state employees after four years especially with the steady increase in the number of state employees annually.

We watched videos of the visionary project, and the interviews which took place with the members of the committee for public policies and administration development in the Supreme Planning Council. When doing so, we were delighted and our imagination was elated, and we wondered if we will see such a radiant image of Kuwait in the future through which the East will be connected as it was with the West.

Will the legendary road — “Al-Hareer” (Silk Road) — revive and restore our commercial and economical connections with the major neighboring countries such as Iraq and Iran, which existed before the “blessing/spite” of oil, in the same manner that Sheikh Nasser and his colleagues explained to us on that jovial evening?

Or will all these plans and aspirations face obstacles and difficulties before they even materialize, as we have recently become accustomed to such a trend?

The barren islands will be constructed and administered as international free trade zone areas by companies of the private sector, majority of which are foreign companies from every corner of the globe, just like Hong Kong, Luxemburg, Liechtenstein and among others.

The area will be governed by a special system of laws, legislations and procedures that distances it away from the bureaucracy and laws which repel investments, are currently governing our economic life, have been preventing us from advancing and left us behind even among our friends in the Gulf region.

In my modest opinion, such laws represent the real challenge that stands in front of this marvelous project. Hence, it is necessary to keep it away from the usual Kuwaiti lawmaking system, which is our Parliament.

Indeed, this magnificent visionary project should not take into consideration the mentality of many of the members of our Parliament who are known for shooting down several vital and pioneering projects, such as the northern depots, construction of the northern fields, Dow Chemical and development of islands even in the Gulf manner and not the international one.

The investors, who are living in those islands and pumping millions to develop them and manage their daily work, will never take risks unless all the horizon is opened for them without having to face adamant bureaucratic, administrative or social obstacles.

Those who want the future Kuwait to go to the glowing islands and those who attach themselves to the traditions and folklores should put an end to their efforts of dragging us behind.

To Sheikh Nasser, his entire crew and those standing behind the realization of that vision which the future of Kuwait is in need, please proceed by the grace of Allah. We hope we or our children or our grandchildren will see the New Kuwait 2035, because the conservative alternative to our current situation is very risky. The matter is in your hands and that of our enlightened leadership.

Therefore, proceed by the grace of Allah. We stand behind you together with all noble people and those who love this country and are keen for its prosperous future. 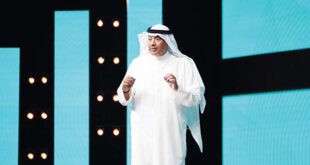