THE government must have prepared itself at all levels to take the major decision of closing down the country for 20 days – any inadequacy in the measures to facilitate such a decision would have a wide range of negative effects, which will increase confusion within the society and put more pressure on the health and security services. They could also have negative effects on the efforts to combat and contain the pandemic.

Frankly, the measures taken by the government so far are not prudent, and fall short of being well timed and well placed. The decision to impose a total lockdown has hindered services such as the services of centers that sell food items. We witnessed how the public thronged such centers two days before the decision came into effect. It seemed as though the Cabinet was not using a proper planning approach with which it started for combating this pandemic.

Undoubtedly, this kind of decision is sanctioned by the Constitution. Perhaps, the government might have ruled out imposing a total lockdown in the beginning until it found itself at a dead-end. It basically overlooked necessary precautionary measures that would clearly preserve the safety of people, and also mitigated the impact of the spread of this disease.

For instance, one of these measures was to lock down the hotspots, which were clearly known from the beginning. These hotspots are areas overcrowded by expatriates. In such places, you would have 45 people living in a single apartment. The reason for such a phenomenon is the lack of labor cities in the country – something we have been demanding for years – to accommodate the huge number of labor force in Kuwait.

The Cabinet would have locked down such areas using clear procedures that would preserve the safety of people and secure food supply for the residents in these areas as well as curb the spread of this pandemic.

The lockdown procedure has been implemented by several countries that are managing to contain the spread of the disease to the lowest levels without complete shutdown of the economy, such as Russia, China, India and some states in the United States of America as well as Saudi Arabia.

In Sweden, the approach is a bit different, as it chose the “herd immunity” approach to fight the spread of the virus. However, in Kuwait, partial curfew was initially implemented without putting in place clear regulations, but eventually, a total lockdown was implemented without proper planning.

It would have been much better to follow the steps taken by other countries from the beginning, and avoid increasing the rate of the COVID-19 spread through a decision that ended up contributing to the increase in the number of infection cases and prompting the need for a decision to impose total lockdown.

In fact, the two hours that people have to walk within their residential areas render these areas to be intensely crowded due to such short period. Also, the process of obtaining food supplies is not well organized, as there are thousands who do not possess modern technologies to obtain the required permit that will allow them to enter supermarkets or have cars to drive to the nearby cooperative societies.

These errors could have been avoided, had the government deliberately raised awareness about the effects of this deadly virus through all information platforms, and abandoned outdated methods in this regard, which would have saved it from these major challenges.

Like many countries, Ministry of Health in Kuwait has daily briefings and among the stats it announces is the number of recovered cases. When we compare the confirmed cases of infection and the recovered ones, we find that the proportion of infection is not all that alarming. If the doses of sound awareness increase, there is no doubt that this will limit the spread of this disease.

Indeed, mankind have experienced many diseases, some of which have been more severe than COVID-19, and eventually managed to overcome them.

Nonetheless, in light of the current coronavirus outbreak and the lack of vaccine so far to cure it, there is no doubt that this epidemic will subside socially before a medicine is discovered to cure it. However, until then, there must be a way to deal with the challenges that have emerged on the margins of this crisis.

Finally, we reiterate that the government and all its apparatuses should increase doses of social awareness concerning the effects of this deadly virus, similar to what Russia and Sweden have done. The government must reduce the harsh measures it has taken, and those who fail to adhere to the preventive and precautionary measures in this regard should bear legal and health responsibility. 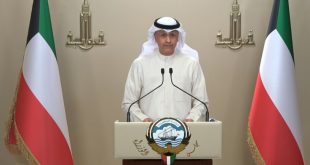 KUWAIT, May 28: Kuwait government will provide needs of inhabitants in areas to be under …