‘Deportation of expats is illegal’

KUWAIT CITY, Nov 28: Reacting to the recently-published news article on suicide cases, an assistant professor at the Kuwait College of Law Prof. Fawaz Alkhateeb stressed that deporting those who attempt suicide is illegal, as attempting to commit suicide is not considered a crime, reports Al-Qabas daily. In a press statement, Prof. Fawaz Alkhateeb said, “The perpetrator of suicide attempt is a victim of psychological conditions. Its incitement or agreement for it is considered a crime which is punishable by imprisonment for a period of up to three years, according to Article 158 of the Penal Code No. 16/1960.

Prof. Fawaz Alkhateeb called on the Ministry of Interior to carry out its legal duties instead of “terrorizing” those who attempt suicide by deportation. He insisted that the ministry must activate the law by referring these individuals for medical and psychiatric examination and assessment, and must work with the articles of compulsory entry in accordance with article 12 of the Mental Health Law 14/2019, which allows investigators of the Ministry of Interior from the General Department of Investigations to refer the person undergoing a psychiatric evaluation to a mental health facility in order to examine him and assess his condition based on a written and justified request

Share
Previous Asian expat and his girlfriend to be deported for smooching in public
Next NO AIRPORT, BORDER CLOSURE SEEN; Health status ‘stable’ 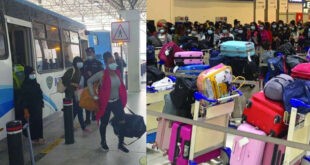 KUWAIT CITY, Dec 14: The Deportation center of the Ministry of Interior stated that the …