Delivered … but has it been received?

IF we study all the programs that the governments of Kuwait initiated since 1962 to date, they all have one thing in common – the government’s motto of “diversification of income”. However, nothing has been witnessed on the ground to achieve this. In fact, the dependence on oil has increased, even though it is a fluctuating commodity in terms of price. This has led people to become reluctant in weaning off from the welfare care through which everything has become free.

Throughout the last six decades, the state did not build a real industrial base, either in the manufacturing sector, or light and medium industries similar to what is prevalent in some Arabian Gulf states.

As for the matter of food security, agricultural plots have been transformed into places for entertainment, such that the Rawdatain water is the only project that is available. Dependence on imports from abroad has increased, as well as tourism, which was the basis for several plans. However, so far no facilities have been built to attract visitors from abroad. Rather, the rate of Kuwaitis who spend their holidays abroad has increased significantly.

In addition to that, there are no plans to attract major investment companies. There are no laws that diversify sources of income, such as the imposition of Value Added tax or increasing the service fees.

This stagnation in the development process has a negative impact on the state as a whole. In the health sector, the quality has fallen to the lowest levels. Education has reached its lowest point, and there are Arab development reports that give us the diagnosis of this sector. Still no serious work has been done for creating an advanced technological infrastructure and services to achieve the “New Kuwait 2035” vision and for transforming the country into a global financial and commercial hub.

In the neighboring countries such as Saudi Arabia, the United Arab Emirates and others, the shockwave brought about by the collapse of oil prices in the 1980s triggered a development opportunity, which reached advanced stages in terms of diversifying the sources of income and achieving significant improvements in the education and health sectors.

In the UAE and Saudi Arabia, the executive management is firmly determined to diversify its income sources using thorough studies. They privatized many sectors, such as health, education, water and electricity services, roads, and communications. They opened the way for the private sector, not only the local, but also the foreign, to employ investments in those sectors.

In the UAE today, there are about 60 private universities and one public university, all of which attract foreign students. They grant long-term residency to investors, innovators and scientific elites. They establish modern factories that export their goods to the other Gulf countries, as well as Iran, Iraq, and the rest of the Arab countries.

As for the Kingdom of Saudi Arabia, which was on the verge of sustaining a long-term financial deficit at some stage, King Salman bin Abdulaziz took a historic decision to diversify the sources of national income. His Crown Prince Mohammed bin Salman undertook the work of developing investment legislation and building an industrial zone – perhaps the largest in the world.

Saudi Arabia opened its doors to all investors, and was able to export goods by about 50 billion riyals. It privatized other sectors, and brought about social openness that reduced the spending on tourism abroad from about $60 billion to $32 billion.

Perhaps there are those who say that care, or rather state welfare care, is a constitutional matter, and therefore, it is not correct for the state to allocate and specialize services. This should be dedicated for those with limited incomes, not for the rich and wealthy, something that the constitution clearly states.

In Kuwait, the balance is disturbed due to the inability of the governments to withstand parliamentary populist agendas, the press, and currently the power of the social media. Therefore, its laws are being used to expel investors, and expertise as well.

We wonder how the government wants to attract foreign investors when it issues, for example, a decision not to grant residency to expatriates who have reached the age of sixty years despite the fact that it is the people of this category who are using their expertise and spending their money in Kuwait, which has become a second home for them.

Most of the decisions and laws issued by governments and the parliaments in recent years have directly or indirectly suffocated Kuwait, and had nothing to do with diversification of the sources of income.

Meanwhile, while the State continues to waste money on frivolous care, it is today about to eat its own meat as it borrows from abroad. Hence, if it does not work on privatization and opening the country to investors as well as abandoning the laws and decisions that expel investments and expertise, then it is undoubtedly heading towards a dangerous financial and economic slide.

The message has been delivered … has it been received?! 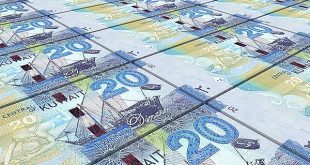 MGRP files 270 ‘lawsuits’ against those who received financial aid illegally