WE honor and appreciate the recent efforts exerted by our esteemed government and its respected members in its fight against the current health crisis.

But we regret to say that the “sudden” decision to impose total lockdown for a period of 20 days is incorrect, despite attempts to patch it up with a two-hour period for people to walk within their residential areas – a move meant to appease the suburbs which are mainly inhabited by the citizens.

Such decisions reflect the inexperience of the Cabinet in taking strategic decisions. We are not blaming them for lack of such experience, especially since some of their faces are new in the political scene. This only happens in Kuwait, as the ministers in other countries are not strangers in the political arena and popular circles, and their experiences and opinions in their field of work are clearly known.

On the other hand, we witnessed the marvelous efforts exerted by some of the ministers since the time of their appointment, when the press raised issues that touch the core of their ministerial work. For instance, the uproar caused by the unjustifiable disbursement of unimaginable payouts by the Kuwait Petroleum Corporation and its subsidiaries to its employees during the current crisis we are living in. Also, the uproar caused by the news concerning Kuwait Petroleum Corporation’s refusal to return billions of public money to the State Treasury instead of spending it without justification, awareness or profound experience in a field such as the Vietnam Refinery, which will cost the public money more than KD 1 billion – an amount that the government will pay or has paid for that failed project. All this happens under the principle – “Your uncle’s money does not concern you”. Nonetheless, this is not our topic for today.

Our subject is the sudden decision taken by our inexperienced Cabinet under the advise of consultants with fake certificates and suspicious experiences, and of the same nationality that we honor and respect, but the matter seems to have gotten out of hand.

This decision was taken by the Cabinet to reduce the daily figures of people infected with coronavirus, even though these infections are mainly from known social circles living in areas where Kuwaitis have never set foot.

Such a phenomenon was overlooked in order to benefit the human traffickers/visa traders with the support of some employees in Ministry of Social Affairs and Ministry of Interior, something that no one can deny except a bickerer.

These human goods exchange hands for the sake of reaching the financial dreamland of Kuwait, but eventually they became responsible for  spreading diseases here and there due to their presence almost everywhere such as in cooperative societies and clinics.

We witnessed the disaster caused by the ill-studied decision that was announced on Friday concerning the implementation of total lockdown on Sunday. The public thronged the supermarkets in an unprecedented manner to buy supplies that would last them for 20 days of the lockdown.

Therefore, we call for the review of the decision for total lockdown within a week or ten days since its implementation, and we hope for its success in bringing down the number of COVID-19 cases to zero.

We also hope this decision has taught the public a valuable lesson concerning the importance of strictly adhering to health precautionary and preventive measures against this pandemic.

Honorable Cabinet, as per an Arabic adage – “Cauterization is the final cure”, a week or ten days of total lockdown is enough to cauterize us. 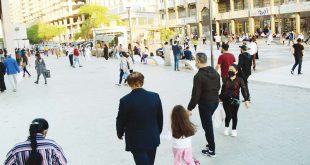