I knew her in her father’s house, the late friend for life Daoud Suleiman, a little girl who barely took a few steps, with an angelic face and a smile more beautiful than I had ever seen and dear to us until this day.

Circumstances then made her the best friend of our only daughter, Joanna. Her presence among us daily was a joyful thing, until the paths of time separated us, but communication remained, and love remained in the hearts.

Her delicacy and petite build never suggested she would be among the champion of sports person, but I was, as always, wrong in judging others.

Altaf Suleiman’s passion for long-distance running began in November 2013 when she participated and completed the Beirut Marathon. But after the suffering she faced in that experience, she asked her friends not to hesitate to slap her if she decided to run any other race to bring her back to consciousness and she did not realize at the time that that experience was only the beginning of a passion that continued with her until today and will remain with her forever.

It all started in 2014 when she heard about the Abbott World Marathon races, the first of which would be in New York and five more races to follow over several years in other capitals of the world before tasting victory.

Altaf liked the idea and started planning for it, taking advantage of her experience in the Beirut Race, and developed her program for the following years with a clear determination in order to complete the six marathons and she got what she wanted, as she participated in New York and succeeded, and then participated in the London Marathon, April 2016, then in Tokyo, February 2017, and Berlin, September 2018, and Chicago, October 2019, and then the Corona pandemic struck the world and the races were postponed indefinitely.

Finally, a few days ago, she successfully completed the recent Boston Marathon to ensure her place among the prestigious six-star medalists.

To know the value of this award and the effort made to obtain it, we must understand the requirements for it, in addition to its large financial, moral and family cost to its participants.

Completing any of the six marathons requires continuous weekly training for two years before each race, and implementing a very strict plan that includes running to improve skills and gain ability to run for distances, improve speed and high fitness, all of which pose a challenge to any contestant, especially Altaf, as she had to train to run during the scorching summer months in Kuwait, and start at three in the morning to avoid the sweltering heat, and disguise as a boy to avoid harassment, this is in addition to her commitment to her government work.

Therefore, it was never easy, especially since the winning journey will extend for many years. But with time and with every success, she gained more confidence and a stronger determination to continue, especially as she dedicated every victory to the soul of the one she loved.

The first victory was for the soul of her father, Daoud, and the last to the soul of Lulwa Al-Duaij, the daughter of her friend Farah, who died in a tragic traffic accident when she was a little girl.

The six Abbott International Marathon races, which are held in six specific cities are among the most famous race tracks in the world, and the wonderful human aspect behind them, where all professional runners, running enthusiasts and people with disabilities are entitled to participate, but only a few win the six-star medal.

It is a brilliant achievement that prompted us to pay tribute to Altaf Suleiman, as she is the first Kuwaiti and Gulf woman to finish this major international marathon series. 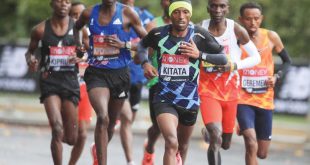 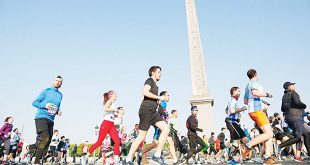 BOSTON, April 17, (AP): The Kenyans are back in Boston after a relative lull that …