Your Highness, Deputy Amir … a government
that is ‘upside down’ will not be able to reform

IT is no secret that the people of this country are under pressure from the MPs who have abandoned everything they pledged during their election campaigns and devoted themselves to restricting society.

The government, on the other hand, is submitting to their demands, which led to closing the country. The situation is not far from the first version of the rule of the Taliban, which is similar to ISIS, rather than a civil state based on a clear and unambiguous constitution.

Kuwait’s Constitution has given rights to everyone. In Article 7, it stipulates that “Justice, freedom and equality are the pillars of society. Cooperation and compassion are the strongest bond between citizens”. Article 29 stipulates that “People are equal in human dignity. They are equal before the law in terms of public rights and duties. There is no discrimination between them on the grounds of gender, origin, language or religion”.

Are the demands imposed by some MPs of underdevelopment on the Council of Ministers included in these two articles? Is this the Kuwait that used to be a cultural and social beacon in the decades before the strict encroachment on the two authorities, and the imposition of its own laws with a de-facto force in violation of the constitution, and the Kuwaiti customs and culture?

Here, we will talk neither about the neighboring countries nor about the first yoga festival held in the Kingdom of Saudi Arabia. That is because those countries preceded us by hundreds of years in opening up. However, we beg to ask – Will a mere innocent recreational activity like yoga lead to the sabotage of society? Who are the members of this society? Since when did an MP, irrespective of who he is, have the right to use his influence to force the government to cancel such activities?

Would a simple activity in a sports club restricted to women only destroy the customs of a four-century-old inherent society, like the women’s belly dance course held in one of the clubs which the Ministry of Interior was quick to cancel?

Is what is happening a continuous quest to strangle the state by deviating from the constitution and dominating the powers of the executive authority because His Highness the Prime Minister is afraid of facing those MPs, and thus overturning the constitution, customs, traditions and open Kuwaiti culture?

Those who read what was published in international foreign newspapers about canceling yoga activity will see how far Kuwait has drifted out of the era. Those newspapers considered stopping such an activity as a kind of terrorism against innocent human behavior. On the other hand, countries that were more strict than Kuwait have become more accommodating to this type of activity.

Your Highness the Deputy Amir and Crown Prince, we are afraid that these people will start forcing the people of tomorrow to not walk on the street without following a certain type of dress code such as “Burka” for women, and still start interfering with people’s privacy in their homes and interfering in their affairs. They may end up banning people from eating chicken that does not cackle, or imposing restrictions on what can and cannot be eaten, and similar types of prohibitions that were unprecedented in Kuwait’s history.

All this started when the executive authority relinquished and passed Law No. 24/95 prohibiting co-education in Kuwait University and applied education institute under pressure from the MPs of political Islamization who continue daily to restrict people’s liberties and exert efforts to lock down the country and isolate it from the world.

A government with such weakness and inability to stop a handful of MPs from continuing their brazen march on its powers will not be able to take up the responsibility of economic, financial and social reform, although it is armed with the position of the Kuwaitis who have become fully convinced that the National Assembly is the reason for the delay of development, the closing of the country, and the interferences in all projects.

Some MPs paralyze the entire parliament just because they are not getting what they want. Therefore, it has become imperative for this upside-down government to depart along with the National Assembly so that matters will not worsen, and so that people could sigh with relief.

Share
Previous O patriots & associations, don’t leave us in the wild!
Next Postal sector in Kuwait remains a failure – No distributors available 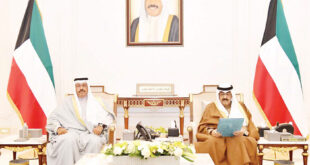 Oh leadership … There is a lot of talk in our country

My story with Agility is government story

This post has been read 18301 times! NEVER before since 1992 has a government received …