The meeting tackled the progress of ongoing Yemeni peace talks that aim to bring a political solution to the conflict in the war-torn nation, in addition to discussions of regional and international developments.

His Highness the Amir presented the UN Secretary General with a ribbon emblazoned with the country’s colors as a token of appreciation for his efforts to promote peace all over the world.

“There is an alarming scarcity of basic food items. The economy is in precarious condition. Whilst the cessation of hostilities is mostly holding, there have been serious violations, causing further casualties and suffering amongst the civilian population, including children,” said Ban. “This worrying situation gives you, the delegations to the Yemeni talks, a very serious responsibility.” However, Ban expressed hope by the commitment of both delegations over a period of many weeks, and into this holy month, to reach a successful outcome.

But he noted that “time is not on the side of the Yemeni people. With every day that the conflict remains unresolved, their situation grows worse. The longer the conflict endures, the more time it will take for Yemen to recover. “The position of the international community is clear: the conflict must end, and Yemen must return to the transitional process and work towards the implementation of the Outcomes of the National Dialogue Conference.” Ban urged the delegations to prevent any further deterioration of the situation, and to show the responsibility and flexibility required to arrive at a comprehensive agreement ending the conflict.

“Yemen is a country of extraordinary beauty, bountiful natural resources and an ancient and noble people. I encourage you to work for the goals of: ending the violence, addressing the roots of the conflict and working together to build a better future for all Yemenis. I can assure that you have wholehearted support of the United Nations to meet these goals.” Ban also noted that he was encouraged by recent releases of prisoners of war and detainees. “I urge the release of all prisoners, including political detainees, journalists, civil society activists and others as a goodwill gesture ahead of the Eid holiday.” Ban, who started a visit to the country earlier today, once again, a thanked His Highness the Amir for the commitment and hospitality. “I extend my best wishes to all, and particularly the people of Yemen, for the upcoming Eid,” he concluded.

Meanwhile, Saudi-led airstrikes killed at least seven people in Yemen on Sunday, residents said. Yemen is more than 15 months into a war involving a Saudi-led Arab coalition that intervened to prevent Iranian-allied Houthis from overthrowing the government. The Houthi-run Saba news agency said five citizens were killed in two air strikes in Khawlan district, southeast of the capital Sanaa. Residents confirmed that five people died in the attack but did not say if they were civilians or armed members of the Houthis, a movement from the Zaydi branch of Shi’ite Islam. In southern Yemen, residents said two women died in an air strike on the home of a merchant in the Qubaita district, located between the Taiz and Lahej provinces. There was no immediate comment from the coalition on the reports. Ban hopes to push the combatants to make concessions.

In a message to Yemeni negotiators from the Saudi-backed government on one side and the Houthis on the other, he said they must try to learn from the example of Colombian rebels and the government who signed a deal last week in Cuba after decades of war. “I urge both delegations to avoid driving the situation to a crisis, and work responsibly and with flexibility for a comprehensive solution that would end the conflict,” he wrote. The Yemen war has killed more than 6,400 people and caused a severe humanitarian crisis in a country that was already one of the poorest in the world.

Yemen shares a long border with the world’s top oil exporter, Saudi Arabia. Officials say the talks have been going in circles: The Houthis demand an agreement on the fate of President AbedRabbo Mansour Hadi and the formation of a broad government that would include them before any withdrawal from cities they seized. 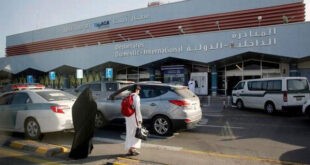