Would you risk 6 months jail for reckless behavior?

While driving my car to work, especially on highways, I have often noticed that many children seated in the front seats or the middle seats of many cars while most of them without a fastened seat belt which may make them potential victims of car accidents. In Kuwait, it appears that it is a phenomenon even though the Kuwaiti Law No. 21/2015 forbids such reckless behavior and considers the driver of the vehicle, a parent or not, negligent as he/she does not care to take safety measures to protect children against potential danger.

The law stipulates that a child under the age of ten (10) years must be seated in the back seat with seat belts fastened. The driver who does not obey the law and practices such reckless behavior is considered to have committed negligence, which is a crime punishable with imprisonment for up to 6 months and a fine not exceeding KD 500, or one of these two penalties as per article 74 of Law No. 21/2015 regarding Child Rights.

Unfortunately, even though it has been more than 6 years since this law came into force, the irresponsibility of the drivers is still visible on the roads. The police have a responsibility to implement this law until the desired goal is achieved, where the main intention is to protect children and raise public awareness and their commitment to it. In developed countries such behavior is rarely seen because of the enforcement of the laws, in contrast to the State of Kuwait where such violations are repeatedly committed by the public.

My message is not only about enforcing the rules, but it is also about committing to the seat belt rule which would enhance the child’s knowledge of respecting the law as well as to save lives. Children trust us, and their protection is our responsibility. We should not expose them to such risks and grave dangers. The loss of children’s lives is simply awful. 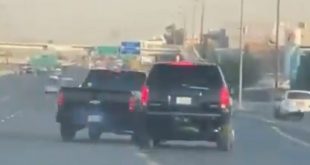