THERE is no doubt that the black boxes that were opened in recent months – even some of those that were opened years ago – exposed the scandals in several government institutions. We thought they were far from suspicions of harm to the public funds, but it turned out that this money is loose and some knew the forbidden (haraam).

Nevertheless, it is good that the COVID-19 crisis exposed some residency traders; especially with the daily episodes we see in the series of investigations with a Bangladeshi MP who has been revealing daily the names of his accomplices – some in the legislative authority and others in security institutions and vital ministries.

Taking into consideration the size of the bribes that this MP was distributing in his country, it is clear that the returns were very large, and that the trading of human beings in which Kuwaitis participate does not unfortunately stop at the borders. Rather, it was so tempting that even those who are supposed to be observers of the executive authority’s performance had indulged even their ears in the “forbidden”, and offended the international reputation of Kuwait.

From Public Institution for Social Security, through the “Malaysian Sovereign Fund”, to the Army Fund, as well as other funds and billions of deals, there has been a systematic process of embezzlement, forgery and illegal profit. This leads to more questions being raised about the rest of the funds for projects in many countries around the world, especially the Kuwait Fund for Arab Economic Development (KFAED). Was it immune to what was revealed in other funds?

Currently, a senior official in this institution – Counselor Nawaf Abdullah Al-Mahmal – is the Vice-Chairman of the “Nazaha” Commission. We hope that the black box of the institution where he worked for years will be opened, considering the fact that no one approached it or placed it under a microscope for the past decades. Nobody followed up its foreign projects and its loans to check if they were granted according to the correct rules or if they were subject to some settlements, especially since many of the countries that obtained these loans suffer from political corruption that has been exposed globally, and some of them are being closely monitored by the United Nations.

We do not question the workers and custodians of KFAED. However, there is a saying – “The bitten is afraid of tugging the rope”. This is because after numerous big scandals in a number of institutions were exposed, the involvement of personalities in important positions in the rest of the institutions and funds has been proven.

Keeping this in mind, it is natural to ask questions about how the manager of a cleaning company was able to employ this large group of responsible personalities to work in the service of his interests. This is in addition to the looting in the Public Institution for Social Security and other funds. Is KFAED immune to manipulation?

May God reward the COVID-19 pandemic, as this painful event turned beneficial from a different perspective. It began with the process of cleaning up the State from all the epidemics that it suffered from in the past years.

Can supervisory institutions such as the State Audit Bureau, the Public Funds Prosecution and other agencies concerned with monitoring the public funds open the files of other institutions including KFAED?

This question draws the attention of those concerned; however, this does not mean anyone can be accused, but the goal is to purify our institutions from suspicions, so that one day they will not become targets for the trolls in troubled waters. 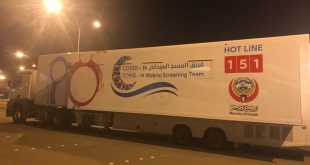