KUWAIT CITY, Oct 8, (KUNA): His Highness the Crown Prince Sheikh Meshaal Al-Ahmad Al-Jaber Al-Sabah said Thursday he would promote contribution of the public towards “spreading spirit of love, tolerance and end of division.” His Highness the Crown Prince, addressing the Parliament after taking constitutional oath, said “I seek with you to draw a bright future,” with democracy as a source of “stability” and defending national interest within the constitution.

His Highness Sheikh Meshaal, who pledged allegiance to His Highness the Amir to continue the service of nation, said he would continue to be “the faithful citizen who works for prosperity of his nation, defending its interests, preserving national unity, seeking progress, committed to our religion and deep-rooted national principles, and keen on meeting aspirations and hopes of the nation and citizens.” He expressed gratitude for His Highness the Amir Sheikh Nawaf Al-Ahmad Al-Jaber Al-Sabah for “the honor” of naming him as Crown Prince.

Meanwhile, His Highness the Crown Prince mourned the Late Amir Sheikh Sabah Al-Ahmad Al-Jaber Al-Sabah who passed away on Sept 29, whom he said was a leader “who loved his country and people, and loved the human being wherever he was until he was named the Humanitarian Leader.” He said he felt great pain for the loss of the late Amir. “I have accompanied him since childhood … until he met his creator.”

His Highness the Crown Prince said His Highness the Amir Sheikh Nawaf Al-Ahmad would continue the legacy of the late Amir in a “country of constitution, democracy, public participation and credibility in deeds before words.” Sheikh Meshaal Al-Ahmad will be bearing huge responsibilities related to the continuous development of the state as well as further cementing principles of democracy and justice. Sheikh Meshaal, named as Crown Prince by His Highness the Amir and blessed by Al-Sabah Family, has been close to the decision-making circles for the past six decades, the latest was His Highness the Late Amir Sheikh Sabah Al- Ahmad Al-Jaber Al-Sabah who passed away on Sept 29.

Throughout his career which he started at the Ministry of Interior until becoming deputy president of Kuwait National Guard, Sheikh Meshaal has always been keen on highlighting importance of national security. “The nation … the nation … the nation … is our responsibility and we must preserve its achievements, protect its security and stability by defending it,” he said. Born in 1940, Sheikh Meshaal received primary education at Mubarakiya School and continued education in Hendon Police College in Britain and graduated in 1960. Sheikh Meshaal joined the MoI after graduation and became head of general intelligence department in 1967 with a rank of Colonel. He continued as intelligence chief until 1980. On April 13, 2014, Sheikh Meshaal was named by the Late Amir Sheikh Jaber Al-Ahmad Al-Jaber Al-Sabah as deputy president of Kuwait National Guard.

Development
He contributed to the development of KNG and promoted its supporting role to state institutions during times of crises, the latest was the coronavirus pandemic.

KNG adopted three five-year plans that will strengthen its capabilities to deal with emerging multi-faceted challenges. KNG, under Sheikh Meshaal’s guidance, sealed cooperation protocols with state institutions to offer support when necessary, like the 2018 airport crisis, addressing radioactive leak in oil facilities and supporting the fire department in major accidents.

KNG also joined the International Association of Gendarmeries and Police Forces with Military Statues (FIEP), a move that Sheikh Meshaal said would contribute to exchange of expertise in a quickly-evolving world. French President decorated Sheikh Meshaal with an Order on Dec 4, 2018, for his contributing to building modern Kuwait and boosting friendship between Kuwait and France. Sheikh Meshaal was also the honorary president of Kuwait society of pilots in 1973-2017, and was one of founding members of Kuwait amateur radio society. Sheikh Meshaal earlier took oath before the National Assembly on Thursday as Kuwait’s Crown Prince, in line with the Constitution.

Respect
“I swear by Almighty Allah to respect the Constitution and the laws of the State, to defend the liberties, interests and properties of the people and to safeguard the independence and territorial integrity of the country and be loyal to the Amir,” he said.

Kuwait’s National Assembly unanimously blessed Sheikh Meshaal as Crown Prince, in a special session held on Thursday. All 59 members attending the special session blessed Sheikh Meshaal. “We would like to congratulate His Highness Sheikh Meshaal Al-Ahmad Al-Jaber Al-Sabah for the unanimous pledge of allegiance as Crown Prince of the National Assembly,” Speaker Marzouq Al-Ghanim said. Article IV of the Constitution states that Kuwait is a hereditary Emirate, successsion of which shall be in the descendants of late Mubarak Al-Sabah.

The Crown Prince shall be designated by His Highness the Amir within one year at the latest, from the date of accession of the Amir. The designation shall be effected by the Amiri decree upon the nomination of the Amir and the approval of the National Assembly, which shall be signified by a majority vote or its member in a special sitting. In case no designation is achieved in accordance with the foregoing procedure, the Amir shall nominate at least three of the descendants of the late Mubarak Al-Sabah of whom the Parliament shall pledge allegiance to once as Heir Apparent. Deputy Prime Minister and Defence Minister Sheikh Ahmad Mansour Al-Ahmad Al-Sabah congratulated His Highness the Crown Prince Sheikh Meshaal Al-Ahmad Al-Jaber Al-Sabah on being sworn into office after gaining the Parliament’s pledge of allegiance. 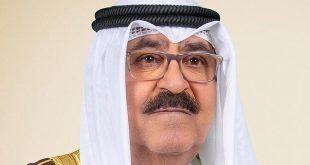 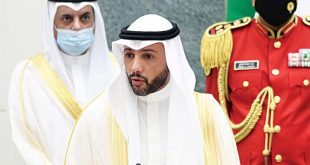 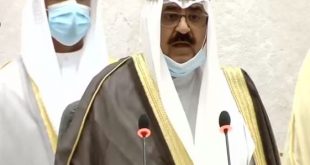