WASHINGTON, Oct 14: The US Department of State is announcing two rewards for information regarding Pakistani national and human smuggler Abid Ali Kahn. A statement by the Department Spokesman said, the first reward of up to USD one million is offered for information leading to the arrest and/or conviction of Ali Khan, while a second USD one million reward is offered for information leading to the financial disruption of Ali Khan’s human smuggling network. The statement added that Ali Khan allegedly operates a Pakistani-based smuggling network that facilitates the travel of undocumented individuals into the United States from the Middle East and southwest Asia in exchange for payment.

In addition to planning and coordinating the international travel from Pakistan through multiple countries, Ali Khan allegedly offered or provided false documents for foreign nationals to use for travel. On April 7, 2021, the U.S. Department of Justice unsealed a federal indictment filed in the Eastern District of Virginia charging Ali Khan with conspiracy to encourage and induce a foreigner to unlawfully enter the United States. On the same date, the Department of the Treasury imposed sanctions against Ali Khan and his transnational criminal organization(KUNA)

Share
Previous ‘Taxes will not serve citizens’ cause … can’t bet on govt, parliament’
Next Thousands of Ethiopians in Kuwait have to pay hefty residence renewal fines 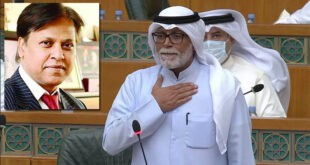