KUWAIT CITY, Jan 14: Police are looking for an unidentified man whose picture of catching pigeons with the help of a net has gone viral in the social media, reports Al-Rai daily. According to sources, the man is seen laying a net in the Mirqab area, trapping the pigeons and putting them in his car.

The Director of Inspection and Control at the Environment Public Authority, Dr Meshaal Al-Ibrahim, said in a statement to the daily ”The action violates the Environmental Protection Law 42 of 2014 and its amendments and executive regulations, especially Article 100, which prohibits the hunting, killing, capture, or harming wild or marine creatures.” Al-Ibrahim stated that “violating this article is punishable by fine which ranges between 250 and 5,000 dinars, however, the case is referred to the Public Prosecution and a court verdict is awaited.”

He added, “Committing this act anywhere on the land of Kuwait is a violation.” He pointed the security authorities are coordinating with the concerned authorities to summon this person and apply the law to him.” 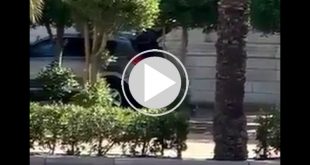