The ethics of ‘Brotherhood’

The proverb says: Learning when young is like carving in rock, and learning when old is like engraving on sand.

It is very clear, for any observer that the level of morals of the Kuwaiti nation like other backward countries is constantly declining day by day. Neither the student nor the teacher’s morals are the same as they were twenty or thirty years ago. Neither the manners of the seller nor the buyer are the same. The same applies to the voter and the candidate in the upcoming elections and the rest of society.

The causes of this deterioration are many, some simple, some complex, but the most important one is the absence of ethics from the school curriculum. There are also other important factors related to the absence of a role model, at home and on the street, and the state’s laxity in implementing the law, or neglecting its implementation.

Consequently, every delay in including the “ethics subject” in the curricula makes it difficult to avoid or address its repercussions. What we need now is extensive lessons to fix the defect in the Kuwaiti mentality by forcibly introducing the ethics material into the minds of students.

Among the manifestations of the impudence of some is what the well-known member of the Brotherhood wrote in response to my welcoming the decisions of the United Arab Emirates, which were all in the interest of general principles and human rights.

He accused me falsely of calling explicitly to allow prostitution in hotels. I do not know how Al-Qabas newspaper allowed the spread of this fabrication. My article is below and does not even contain the word hotel. He also described what I wrote with rudeness and impoliteness.

I tell him here, “A vessel filters what it contains, and what’s bred in the bone will come out in the blood. I wanted to publish such descriptions, in the respectable newspaper, not because it hurt me, because I know myself well, but out of respect for its position and the feelings of the readers.

It was possible to accept what was issued against us from any other person with a reasonable biography. All the matters that we called for and rejected are applied, with greater expansion and intensity in a country dear to his heart and the heart of all Muslim Brotherhood his crossed eyes prevented him from seeing that country, so is there hypocrisy any greater than this?

If we had praised the consistency of the laws of the Republic of Turkey with the Universal Declaration of Human Rights and its legalization of prostitution, its great tolerance of homosexuals, and the non-objection of its laws to the sharing of unmarried people in housing, and much more, would he have written against us and attacked us with all that indecency?

Share
Previous Kuwait is keen to support ‘abused’ women to help them live better life
Next Soak your oil, drink its water 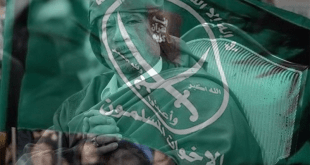 You should be ashamed of yourself

Ahmed Al-Jarallah Editor-in-Chief, the Arab Times IS that enough for the ‘Brotherhood’ cell arrested recently …