LONDON, March 22, (Agencies): Four people, including the attacker and a police officer, died in Wednesday’s terrorism incident at the British parliament, police said. “Four people have died. That includes the police officer who was protecting parliament and one man we believe to be the attacker who was shot by a police firearms officer,” Britain’s top counter-terrorism officer Mark Rowley told reporters.

At least a dozen people were injured in London on Wednesday after a car crashed into pedestrians near the British parliament and an assailant stabbed a policeman in what police called a terrorist incident. The knifeman was then shot by police in the shadow of Big Ben, where he had tried to force his way into a courtyard just outside the Houses of Parliament.

The incident appeared to have unfolded in several locations, including on nearby Westminster Bridge where eyewitnesses said a car had crashed into pedestrians. In Kuwait, His Highness the Amir Sheikh Sabah Al-Ahmad Al-Jaber Al- Sabah sent two cables of condolences to Queen Elizabeth II and Prime Minister Theresa May over the victims of the terrorist attack in London on Wednesday.

He expressed strong denunciation of the deadly attack that claimed two lives and injured several others. His Highness reaffirmed Kuwait’s outright rejection of all forms of terrorism and renewed support to the government of the friendly United Kingdom in whatever measures it might take to protect the country’s security and stability. He also expressed condolences to the families of the victims and wished those injured quick recovery.

His Highness the Crown Prince Sheikh Nawaf Al-Ahmad Al-Jaber Al- Sabah sent two cables to Queen Elizabeth II and Prime Minister May. His Highness the Prime Minister Sheikh Jaber Al-Mubarak Al-Hamad Al-Sabah sent two similar cables. Meanwhile, Kuwait’s embassy has urged Kuwaitis in Britain to commit themselves to police instructions in the wake of the attack on a policeman near the House of Commons in Westminster on Wednesday.

In a statement, the embassy called Kuwaitis to carefully observe the measures of safety and security applied by the British authorities in such conditions. It urged them to contact the embassy on 02075903400 in case of emergency.

The embassy contacted the National Union of Kuwaiti Students – UK and Ireland Branch, to deliver the warning message. Reuters reporters inside parliament heard loud bangs and shortly afterwards saw two people lying on the ground in a courtyard just outside. A Reuters photographer said he saw at least a dozen people injured on the bridge. His photographs showed people lying on the ground, some of them bleeding heavily and one under a bus. The incident took place on the first anniversary of attacks by Islamist militants that killed 32 people in Brussels. “Officers – including firearms officers – remain on the scene and we are treating this as a terrorist incident until we know otherwise,” police said in a statement. “We know there are a number of casualties including police officers but at this stage we cannot confirm numbers or the nature of these injuries,” Commander BJ Harrington told reporters. “We received a number of different reports which included a person in the river, a car in collision with pedestrians and a man armed with a knife.”

A woman was pulled alive, but with serious injuries, from the Thames, the Port of London Authority said. French Prime Minister Bernard Cazeneuve said three French nationals were injured. French media reported they were high-school students. “I just saw a car go out of control and just go into pedestrians on the bridge,” eyewitness Bernadette Kerrigan told Sky News. She was on a tour bus on the bridge at the time. “As we were going across the bridge, we saw people lying on the floor, they were obviously injured. I saw about 10 people maybe. And then the emergency services started to arrive. Everyone was just running everywhere.” Officials said an assailant had stabbed a policeman and then been shot.

Witness reports suggested the assailant and the stabbed policeman were the people seen lying on the ground outside the parliamentary building. The House of Commons, which was in session at the time, was immediately suspended and lawmakers were asked to stay inside. Prime Minister Theresa May was safe after the incident, a spokesman for her office said. He declined to say where May was when the attack took place. Journalist Quentin Letts of the Daily Mail newspaper told LBC radio that he had witnessed the stabbing of the policeman and the shooting of the assailant from his office in the parliament building. “He (the assailant) ran in through the open gates … He set about one of the policemen with what looked like a stick,” Letts said.

“The policeman fell over on the ground and it was quite horrible to watch and then having done that, he disengaged and ran towards the House of Commons entrance used by MPs (members of parliament) and got about 20 yards or so when two plain-clothed guys with guns shot him.” Reuters reporters inside parliament saw a large number of armed police, some carrying shields, pouring into the building. A helicopter ambulance landed on Parliament Square. US President Donald Trump told reporters at the White House he had been briefed on events in London but gave no details. In Edinburgh, the Scottish parliament suspended a planned debate and vote on independence as news of events in London came in. New York police ramped up security at British sites across the city on Wednesday after an assailant stabbed a policeman outside Britain’s parliament and was then shot by police 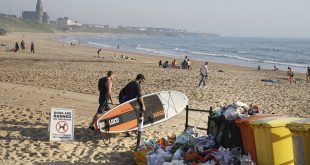 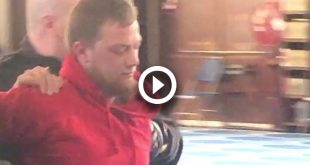 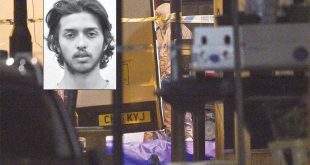 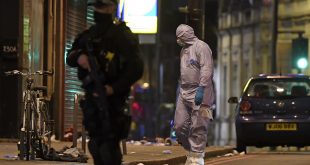