Taxis back on road … drivers may face difficulties and competition

KUWAIT CITY, July 29: The taxis which have been collecting dust for over five months following the outbreak of the coronavirus were out on the streets of Kuwait in what appeared like a desperate attempt to get back to business while most of the commuters who have become accustomed to do without taxis looked reluctant to hail a cab, reports Al-Seyassah daily.

For the taxi drivers, they missed an important means of livelihood, and this time they are back to business under new conditions and new rules, the most prominent of which is just one passenger in each car, which may cause some difficulties, especially if the passengers are a husband and wife or a girl and her brother or sister

Suffered
One of the taxi drivers Abu Kalam says he has already suffered much in the last period and was even threatened with complete loss of his source of livelihood after he lost it temporarily during the past months since the owner of the taxi office had once closed the entire office as a result of the losses incurred by him following the government decision to pull the taxis off the road.

Another driver Mohsen Awad said the losses are double, as they are losses not only in income, but they have to repay the taxis because much damage has been done to the vehicles engines since they were inactive for a long period of time, which means most taxis will face problems in maintenance in the coming period.

He pointed out the new conditions imposed on the operation of taxi cars will reduce the income but at the same time it is much better than stopping plying the taxis altogether. He hopes the passengers will get used to the situation with time as the physical distancing rules ease and the number of passengers is limited to more than one.

Some taxi drivers say the lack of movement in general and the closure of schools, as well as the restrictions imposed on employees of government departments, will make it difficult for them to find customers and may lead to great competition between taxi drivers.

‘One passenger’ Taxi service decision needs to be reviewed 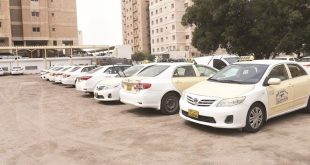 KUWAIT CITY, July 27: With the start of the third stage in the plan for …