KABUL, June 23, (Agencies): Taleban militants killed at least 16 Afghan police and two civilians in western Badghis province after their three-day ceasefire for the Eid al-Fitr holiday ended at the weekend, offi- cials said on Friday. The Taleban, fighting to reimpose strict Islamic law after their 2001 ouster, resumed their campaign on Thursday after rejecting President Ashraf Ghani’s request to extend their ceasefire beyond Sunday.

On Wednesday, they killed at least 30 soldiers and captured a military base in Badghis. A senior security official in Kabul said the Taleban were fighting to capture eight checkpoints in Badghis. On Thursday, they gained control over two checkpoints and ambushed arriving reinforcements. Haji Saleh Bek, governor of the Abkamari district, said 16 police were killed.

Another government official, Mohammad Naser Nazari, said the Taleban had planted a bomb on the body of a soldier that exploded when people attempted to retrieve the bodies. Two civilians were killed. No one immediately claimed responsibility for the most recent attack, but the Taleban are active in Badghis and have repeatedly claimed attacks against Afghan security forces there. Ghani extended by 10 days his unilateral ceasefire, initially due to end on Wednesday.

The Taleban observed a ceasefire over the threeday holiday but rejected the government’s request to extend it. Some critics have said Ghani’s ceasefire allowed the Taleban to freely enter government-held areas and plan attacks. Taleban fighters kidnapped 43 people from a road construction camp during a raid in southern Afghanistan that also killed four security forces, an official said Friday, in the latest fighting since the group’s ceasefire ended.

Militants attacked the camp in Spin Boldak district in Kandahar province overnight, provincial governor spokesman Dawood Ahmadi told AFP. Among the 43 kidnapped were technical workers, cooks and drivers. Four police were killed and another wounded after security forces sent to rescue the workers exchanged gunfire with the Taleban, Ahmadi added.

An employee of the Afghan road construction company also confirmed that 43 people had been kidnapped. The Taleban claimed responsibility for the attack, but told AFP that the original target had been a police checkpoint. Police fl ed the checkpoint and went to the camp where the construction workers were sleeping. The Taleban pursued the police but, unable to identify who was who, decided to kidnap “many” people, the group said. 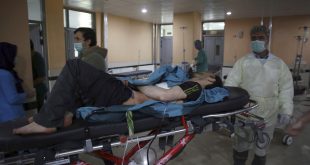