PARIS, Oct 10, (AP): Minutes after suddenly becoming a Grand Slam champion at age 19, while ranked just 54th, Iga Swiatek held a microphone during the French Open trophy ceremony and was hesitant for pretty much the only time over the past two weeks. “First of all, I’m not very good at speeches,” Swiatek began, haltingly, “so, sorry, because I won my last tournament like two years ago, and I really don’t know who to thank.” When she’s got a racket in her hand, it’s a whole different story. With the poise of a veteran and the shots of a champion, Swiatek wrapped up a dominating run at Roland Garros, grabbing the last six games to beat Sofia Kenin 6-4, 6-1 in Saturday’s final.

“Two years ago, I won a junior Grand Slam, and right now I’m here. It feels like such a short time,” Swiatek said, her voice cracking. “I’m just overwhelmed.” Swiatek (pronounced shvee-ON’- tek) is the first Polish tennis player to win a major singles trophy and said, “I know it’s pretty crazy back home” – where one newspaper’s front page was splashed with the headline “Poland Garros” ahead of the final. When she smacked one last forehand winner to the corner to end things, Swiatek placed her right hand over her mouth then crouched, shaking her head. Hard to believe? Maybe. This was, after all, only her seventh major tournament; she’d never been past the fourth round at one. But the way she played these two weeks – with powerful groundstrokes sent to corners, the occasional drop shot, terrific returning and impressive court coverage – made this outcome less of a surprise. Swiatek lost only 28 games across seven matches and is the first woman to triumph in Paris without ceding a set since Justine Henin in 2007.

She also is the first teen to win the women’s title there since Iva Majoli in 1997. And Swiatek did it with victories over such opponents as 2018 champion Simona Halep and 2019 runner-up Marketa Vondrousova, both by scores of 6-1, 6-2. So it made sense that Swiatek would be able to get past the fourth-seeded Kenin, even if the 21-year-old American was trying to claim her second major title of 2020 after winning the Australian Open. Kenin was 16-1 in Grand Slam matches this year. But she dealt with a leg issue in the second set and showed frustration by kicking her red-white-and-blue racket after lost points. And then there was this: She ran into the composed Swiatek, who only recently completed her high school studies and listens to “Welcome to the Jungle” by Guns N’ Roses before walking on court. This weekend is the culmination of an unusual two weeks, to say the least. The tournament was postponed form May-June to September-October because of the coronavirus pandemic; the recently rising number of COVID-19 cases in France led the government to limit the number of spectators allowed on the grounds to 1,000 each day.

Some top women, including 2019 champion Ash Barty and three-time major champ Naomi Osaka didn’t enter the event; 23-time Slam winner Serena Williams withdrew before the second round with an injury. The temperature was in the mid- 50s (low teens Celsius), with a slight breeze, and the hundreds of fans scattered in Court Philippe Chatrier were mostly subdued – other than a group that would shout Swiatek’s first name, stretching it out over several seconds each time to sound like “Eeeeeeeeeeegah”. Swiatek began with a 3-0 run, taking 12 of the first 15 points, delivering four winners and zero unforced errors. No one expected Kenin – selfdescribed as “feisty” – to go quietly. She got on the board with a hold, then broke when Swiatek double-faulted, the first sign that the magnitude of the moment might be hitting her. Soon enough, it was 3-all. 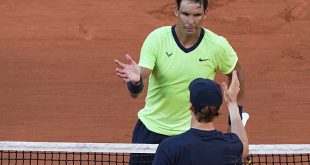 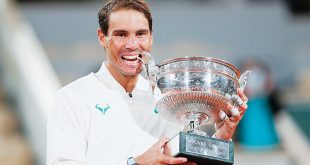