This has caught everyone – especially those who closely follow the rapprochement in relations between the two neighboring countries – by surprise because the move has poured cold water over all efforts that have been so far been exerted.

The diplomatic sources at the United Nations told the daily that the Iraqi representative to the UN, Ambassador Mohammed Bahr Al-Uloum, delivered the letter to the President of the Security Council, requesting it to be circulated among the Council members.

The Iraqi envoy has also reportedly met a number of council members to explain Iraq’s position. The Iraqi government has asked the United Nations to treat this as official protest against what it called ‘the changes made by the Government of Kuwait in the maritime area after the mark 162 in Khor Abdullah by strengthening the shallow area (Fasht Al-Aij) and the establishment of a port structure unilaterally without the knowledge and approval of Iraq, considering that this has no legal basis in the joint plan to regulate maritime navigation in Khor Abdullah’.

Iraq said the demarcation of the border by one party in areas not agreed upon by the concerned parties, as stipulated by the Amiri Decree 317 of 2014 regarding the delimitation of the maritime areas of Kuwait is null and void under the provisions of international law. In its letter to the Security Council, the Iraqi government noted Kuwait’s continued imposition of a de facto policy of creating a new situation that changes the geography of the region which will not contribute to supporting the efforts of the two countries to reach a final demarcation of their maritime boundaries.

A Kuwaiti official, who wished to remain anonymous, said the Iraqi complaint to the Security Council comes at a time when bilateral relations between the two countries are moving forward and has culminated in mutual high-level visits between officials of the two countries.

The officials pointed out border disputes are usually discussed at a bilateral level between nations through joint committees and others, as well as the demarcation of the border between Kuwait and Iraq came in accordance with Resolution 833 of the Security Council in 1993.

He added the issue of the maritime zone and its markings and demarcation were discussed during all bilateral meetings between Kuwait and Iraq, and the latter would have preferred not to go into technical and legal details to avoid backlash at home from the Parliament and the Iraqi street. The official said it would have been wise on Iraq’s part not to circulate the letter as an official document among the UNSC members.

The Kuwaiti official stressed the facility (Fasht Al- Aij) falls within Kuwait’s territorial waters and this has been historically and legally documented. On the other hand, Iraq’s complaint against Kuwait at the UNSC has provoked a tense reaction from Kuwaiti MPs who have expressed their displeasure and called on their government to respond to the charges.

Chairman of the parliamentary Foreign Affairs Committee MP Abdulkareem Al-Kandari called on the government to explain the situation, especially since such an accusation has severe diplomatic ramifications rendering previous diplomatic initiatives and visits insignificant.

He pointed out this course of action can only be described as provocative which demands a firm Kuwaiti stance, considering the issue is subject to UN Security Council Resolution No. 833/1993. He warned that “any infringement on this resolution will affect the sovereignty of Kuwait.” He stressed that it is also unacceptable for official news outlets to disregard this matter while praising diplomatic relations between the two countries. 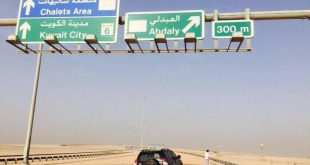