KUWAIT CITY, Jan 30: National Assembly Speaker Marzouq Al-Ghanim has announced the cancellation of the membership of Waleed Al-Tabtabaei and Jam’an Al-Harbash based on the ruling of the Constitutional Court on Dec 16, 2018.

He made the announcement during the ordinary session of the Assembly Wednesday. Two parliamentary seats are vacant now; hence, the need for supplementary elections.

The ruling entails that if a lawmaker fails to fulfill any of the parliamentary membership conditions, his membership is cancelled automatically as per Article 82 of the Constitution.

This makes Article 16 of the internal regulations of the Assembly futile as the Assembly has no power over the Constitution, Al-Ghanim explained.

In accordance with Article 50 of the Constitution and Article 18 of the parliamentary regulations, the Assembly officially announced the two parliamentary seats vacant.

After the announcement, several MPs left the session in protest against the decision including Abdulkareem Al-Kandari, Osama Al-Shaheen, Shu’aib Al-Muwaizri, Adel Al-Damkhi, Naif Al-Merdas, Mohammed Al-Mutair, Hamdan Al-Azmi, Mohammed Al-Dalaal and Thamer Al-Suwait who told journalists outside the hall that the decision of the Speaker is a violation of the Constitution and its principles; in addition to weakening the power of the legislature.

On the other hand, MP Abdullah Al-Roumi pointed out this is an unfortunate event, but the decision is simply an application of the law. He said the Assembly violated the Constitution when it invoked Article 16 of its internal regulations after the issuance of the verdict. “Although the issue has been politicized, all of us must respect the law,” asserted the MP.

Moreover, former MP Jam’an Al-Harbash took to Twitter after hearing about the decision. He vaguely stated: “They won not because they have great financial advantage, not because they are smarter.”

Former MP Waleed Al-Tabtabaei also posted on Twitter that the Assembly has no right to announce such a decision considering it voted on maintaining their membership in October 2018. He added the verdict does not apply on the Assembly since the decision was taken before declaring the unconstitutionality of Article 16 of the internal regulations.

Article One of Law No. 14/1973 on the establishment of the Constitutional Court stipulates that the court is in charge of the interpretation of constitutional provisions and ruling over disagreements on the unconstitutionality of laws, decrees and regulations, as well as appeals regarding the election of MPs or validity of their membership.

During deliberations, Finance and Economic Affairs Committee Chairman MP Salah Khorshaid said the bill opens the window of early retirement until 2020; thereby, allowing men who have been in service for 30 years and women with 25 years in service to retire early.

Article One of the bill states that no employee shall be referred for retirement if he is not entitled to pension which is equivalent to 95 percent of his salary. The Civil Service Commission has its own regulation invalidating any procedure or decision which contradicts this article.

The lawmakers attributed approval of the bill to the fruitful cooperation between the Assembly and government. They believe this will generate more job opportunities, make married and single women equal, and provide financial alternatives for retirees other than obtaining bank loans. They also urged the government to grant full pension and end-of-service pay equal to 15 times the current salary to employees referred for retirement. 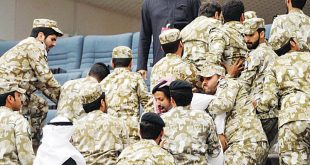