SYDNEY, Aug 23, (AP): The Australian cricket team departed Sunday for a tour to England like no other in the long history between the two nations. The teams will meet in three one-day and three Twenty20 internationals in stadiums without fans, played under strict biosecurity protocols. Between matches the Australians will be locked in a hermetic bubble to ward off the threat of the coronavirus.

They are the first Australian national sports team to leave the country since the global pandemic began. Australia hasn’t played a match since March 13, when a scheduled one-day series against New Zealand was abandoned. As captain Steve Smith left Sydney on Sunday for Perth, from which the Australian team’s chartered flight was to leave for London, he said he is eager to play again, whatever the surrounding circumstances. “I’m sure there’ll be tough moments for the guys being away from their families for long periods of time … and being stuck in the same place for an extended period,” Smith said.

“But we’ll all work together and help ourselves and each other out.” Smith was also sad that stadiums won’t be full of the England fans who have always jeered him in the past, moreso since his suspension for ball tampering. “I do like batting there,” Smith said at Sydney Airport. “But unfortunately there’s no crowd there to egg me on and give me a bit more motivation. “Still, there is going to be plenty of eyes on the TV and it is going to be great to be back out there playing.”

England fans taunted Smith relentlessly when he made his Test return there last year after his 12 months suspension over the ball tampering scandal in South Africa. He drew on those reactions to post 774 runs in that year’s Ashes series at an average of 110. Smith said he isn’t concerned by Australia’s three months absence from international cricket and England’s advantage in having played recent Test series against the West Indies and Pakistan.

“We have to start at some point and this is our starting point,” he said. Australia will take a 21-man squad and will play at least five inter-squad matches during its two weeks in quarantine. The team will be headquartered at Southampton where it will be surrounded by a tight biosecurity bubble. Players will be able to play golf but will not be able to leave their hotel for drinks or meals. They will have to make their own beds to avoid interaction with hotel staff. Any biosecurity breach could jeopardize the series 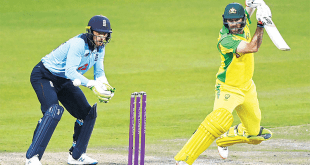