KUWAIT CITY, July 4: Shuwaikh Port has become the first marine outlet in Kuwait, after Nuwaiseeb and Salmi land border entries, to be equipped with a device to detect via X-Ray technology contrabands carefully hidden inside various car parts entering the country.

On the sidelines of the inauguration of the X-Ray device by Kuwait’s General Administration of Customs at the Shuwaikh port, director of Security Systems Department at the administration Talal Al-Aidan told the daily the administration launched the device to detect contraband hidden in vehicles, using X-Ray installed in an area of 42 square meters, after the approval of Kuwait Ports Authority.

He added the device is the third of its kind, after previously installing two in Salmi and Nuwaiseeb land border entries, to detect and prevent contrabands from entering the county. Al-Aidan explained the device receives small cars and half-lorries amid commitment to proper security and health measures to protect the operators of the device.

“The motorist exits the car before the car enters the screening section, and the entire process does not take more than two minutes. In addition to keeping safe distance from the device while in operation and other safety measures, the device automatically disconnects when safety and restriction measures are breached,” he noted.

Al-Aidan stressed the customs administration’s keenness, under the direction of the Director of Kuwait Customs Directorate General, Jamal Al-Jalawi, to provide customs officials with all the latest equipment and tools to help them in the detection of drugs, weapons, smuggled funds, etc. to ensure protection of the country and its people since customs is the first line of defense for Kuwait.

The inauguration ceremony was attended by Saleh Al-Harbi, Director of the Northern Ports Department, Inspector Mohamed Al-Otaibi and Inspector Saleh Al- Aqeel, as well as customs superintendents and inspectors. 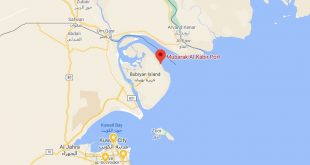