KUWAIT CITY, Sept 7: Sabah Al Ahmad Center for Giftedness and Creativity (SACGC) Organized Wednesday a ceremony to honor four engineers from (EQUATE) Petrochemical Company for obtaining a patent from the US Patent Office for the invention. The engineers honored for creating a mobile maintenance robot to check the efficiency and safety of indoor spaces with the aim of raising the levels of safety, efficiency and quality during maintenance.

The robot provides a higher ability to reach confined sites during inspection and maintenance operations without human intervention. In a statement to KUNA, Chairman of Board of Directors at Sabah Al-Ahmad Center for Giftedness and Creativity (SACGC) Bader Al- Humaidhi said that the average cost of a single invention up to the stage of obtaining a patent is USD 25,000, provided by the Center to support Kuwait’s young inventors and creators.

Innovations
The honoring of the winners is to encourage inventors and young Kuwaiti creators to provide innovations that are more beneficial to humanity in order to achieve more progress of Kuwait in Global Innovation Indicators, Al-Humaidhi explained. In this regard, he praised the efforts made by EQUATE to obtain the patent that not only provided assistance in Kuwait’s factories but also exceeded that to reach the Dow factories in the United States to help with maintenance.

On his part, Deputy Director Manager at EQUATE for Technical Services De. Salman Al-Ajmi said to KUNA that this patent is the third of its kind obtained by the company. Al-Ajmi stated that the company succeeded in registering the patent, which was developed by a team of company engineers in cooperation with the Kuwait Foundation for the Advancement of Sciences (KFAS) and the Sabah Al-Ahmad Center for Giftedness and Creativity. Al-Ajmi explained that the invention demonstrates the company’s firm commitment to innovation and its continuous endeavors to enhance the technical environment. It provides assurance of safety and efficiency standards that are adhered to in all aspects of the tasks provided, the invention is a qualitative and important leap in the use of advanced and effective technologies to support advanced maintenance, he noted.

Achievement
In turn, the commissioned Director of the Sabah Al-Ahmad Center for Giftedness and Creativity, Dr. Bassam Al-Faili, told KUNA “ we celebrate today a distinguished Kuwaiti achievement after registering a patent for a project that concerns the oil sector”. Al-Faili indicated that this achievement is the result of close cooperation between the center and EQUATE through developing ideas and transforming them into prototypes and then proving their feasibility and effectiveness, leading to obtaining a patent to preserve rights and then turning them into a commercial product. He expressed pride in this achievement and the continuous cooperation with one of the important Kuwaiti companies to support the country’s economy, stressing the center’s keenness and its continuation to support Kuwaiti youth of creators and innovators. Since its establishment, the Sabah Al-Ahmad Center for Giftedness has obtained 495 patents, of which 107 inventions has reached marketing stages. (KUNA) 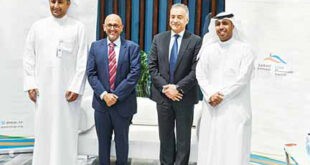