KUWAIT CITY, July 20: After the “Road of Death” claimed the life of one of the residents of Sabah Al- Ahmad Residential City a few days ago, several residents have been insisting that the situation can no longer tolerate silence. They expressed their frustration and regret over the negligence in dealing with the problem of large trucks driving on Wafra Road at high speeds without any supervision, reports Al-Anba daily.

During a protest organized by the residents Saturday night on the Road of Death – the name given by the people to Wafra Road, one of the protesters Sultan Al-Buraq spoke on behalf of the residents of Sabah Al-Ahmad Residential City, stressing that the reason behind the protest is a tragic accident that occurred five days ago which resulted in the death of one of them.

He explained, “The message was delivered before the gathering, and we have seen moves from the Ministry of Public Works, General Traffic Department and patrol teams to prevent trucks from passing.

However, we believe what is happening is temporary and only for a specific period. The randomness on the road will resume by the force of unauthorized drifters as seen previously. We have gathered to deliver a message to the officials. We want to say our souls are expensive. The road is used by men, women, children, farm owners, property owners and the handicapped. It is a vital route for us.

The accident must not be ignored; some good must come out of it for the benefit of all. Trucks weighing thousands of tons pass on the road without supervision and they sometimes move in the opposite direction of the traffic. Such movements are continuing, and we do not accept solutions in the form of patchwork. Large trucks should be prevented from using this road. The truck lane must instead be diverted to the Mina Abdullah Bridge”. Meanwhile, another protestor Hussein Nasser Hamel declared, “The demands that the people of Sabah Al-Ahmad Residential City call for are right. It is the duty of the concerned authorities to reassure citizens through serious measures by closing the potholes on Wafra Road and opening a road through Abdullah Port in order to end the series of tragedies that the people suffer from”.

Another protestor Hamad Saud called on the officials to take necessary and important measures to end the pending projects to serve the people of Sabah Al Ahmad Residential City. He said they learned of the signing of a contract worth KD 28 million earlier to cultivate the city and its surroundings. Saud called for the implementation of projects and the establishment of colleges and universities instead of cutting distances to Shadadiyah and Kuwait.

Furthermore, a resident of the Sabah Al-Ahmad Residential City Bader Al-Otaibi stressed that the Road of Death has caused the death of a dear brother because of the trucks that use this road. He urged the Public Authority for Industry, Kuwait Municipality, Ministry of Public Works and Ministry of Interior to do their part and stop wasting people’s lives on an unfinished road especially since it has been five years since the work on the road began.

In this regard, Chairman of Kuwait Integrity Association Lawyer Ahmad Al-Badih disclosed, “We are in solidarity with the people of Sabah Al-Ahmad, in their affl iction, and the painful accidents they have suffered from every now and then. However, we are optimistic that a solution that satisfies all of the families including the relatives of the deceased will be adopted. We offer our condolences to the family of the deceased Ali Al-Shirazi, and we wish the injured a speedy recovery.” 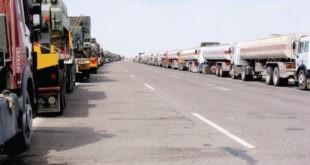 This post has been read 18775 times! KUWAIT CITY, Jan 23: The Egyptian land transport …