The exodus figure has jumped about 20,000 in a day and from 164,000 on Thursday. Bangladesh authorities plan to build a camp that could house a quarter of a million people. “Some 290,000 Rohingya arrived in Bangladesh since Aug 25,” Joseph Tripura, a spokesman for the UN refugee agency, told AFP. New violence started on Aug 25 after Rohingya militants attacked police posts in Rakhine, triggering a security forces crackdown.

Those who have fled across the border have accused the Myanmar military of staging reprisal attacks on Muslim villages. Officials said the UN has found more Rohingya in Bangladesh villages and areas which were previously not included by relief agencies. Agencies are now bracing for a new increase in numbers. Dipayan Bhattacharyya, acting World Food Programme (WFP) head in Bangladesh, told AFP “the situation is very volatile.”

He added: “We started with planning for an influx of 120,000. Then we made a resource planning for 300,000. The current influx has almost now reached 300,000. Now the WFP and the other UN agencies on the ground may have to review it again if the influx continues unabated.”

Hungry Rohingya are running towards every food truck that arrives in the camps. Highlighting the uncertainty, Bhattacharyya said: “People are very desperate to get whatever assistance they can get in terms of food, shelter and water. They are deprived of everything. They are desperate for just basic survival.” The WFP started distributing 25-kilogramme rice sacks to families who have just arrived.

Meanwhile, don’t expect the United States to step in and resolve what is increasingly being describing as an ethnic cleansing campaign against Myanmar’s downtrodden Rohingya Muslims. Not wanting to undermine the Asian country’s democratic hero, the US is cautiously criticizing what looks like a forced exodus of more than a quarter-million Rohingya in the last two weeks as Myanmar’s military responds with hammer force to insurgent attacks. But neither the Trump administration nor lawmakers are readying sanctions or levying real pressure on Aung San Suu Kyi’s government. And a bill making its way through Congress even talks about enhancing US-Myanmar military cooperation.

“Further normalization of the military-to-military relationship with Burma is the last thing we should be doing right now,” said Walter Lohman, Asia program director at the right-leaning Heritage Foundation. “What a terrible signal to be sending.” Human rights groups are equally appalled. The UN says 290,000 Rohingya have fled from Myanmar, the country also known as Burma, into neighboring Bangladesh since Aug 25. It is the biggest flight of the long-suppressed minority in a generation.

The Rohingya are denied citizenship in Myanmar and widely hated by majority Buddhists who regard them as illegal immigrants, although many have lived in the ethnically diverse Southeast Asian nation for generations. In a related news, the organization that oversees the Nobel Peace Prize said Friday the 1991 prize awarded to Myanmar’s Aung Sang Suu Kyi cannot be revoked. 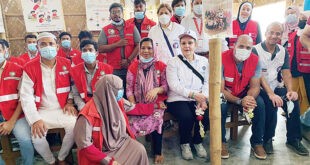 This post has been read 5145 times! Driver of a bus that was brought to …