KUWAIT CITY, Dec 24: Several Public Authority for Youth employees have appealed to Minister of Information and the State Minister for Youth Affairs Mohammad Al- Jabri to push for concerned authorities to resolve the issue of suspended salaries, especially as the salaries of their counterparts have been deposited since Dec 21, reports Al-Rai daily.

Meanwhile, the Director of Security Organization Department at the Directorate-General of Civil Aviation (DGCA) Muhammad Al-Thuwaini said the primary role of the administration is the implementation of laws and legislations issued by international organizations, reports Al-Anba daily.

Al-Thuwaini, affirmed Kuwait has obtained a very high level of security rating over the past two years. He also clarified that work is underway to establish a full center for civil aviation inside the GDCA licensed by the international organization, just like some other countries.

He said: “We saw the T4 Terminal should be only for the Kuwait Airways fl ights to avoid the annual rush at the airport, in addition to distributing fl ights from the international airport, which contributes to relieving the pressure on Kuwait International Airport.” He pointed out there are no international violations as far as the observations that we take into consideration, and we apply the laws imposed by international organizations related to aviation security and safety

Share on:
WhatsApp
Share
Previous 31,500 housing units will be completed in fiscal 2019/’20
Next Al-Aounan participates in new drama series 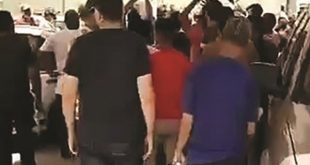