Amir reiterates Kuwait’s stance against all forms of terrorism

KUWAIT CITY, June 18, (KUNA): His Highness the Amir Sheikh Sabah Al-Ahmad Al-Jaber Al-Sabah said he hopes for healing the rift among the Gulf Cooperation Council (GCC) member states through dialogue, urging the Kuwaiti people to abide by national unity for the security and safety of the nation. In a speech on Sunday marking the last 10 days of the Muslim holy fasting month of Ramadan, His Highness the Amir said he is looking forward to overcoming the latest developments in the Gulf, and remedying the situation through providing the favorable conditions to dissolve the regrettable disagreements and heal the rift through dialogue.

His Highness the Amir highlighted the deeprooted historical ties, rapport family relations, and common fate and interests that connect the GCC member states. These makes it inevitable for us to lavish utmost effort to preserve the “Gulf entity” so that it can remain cohesive, embodying the expectations of the peoples in the member countries, His Highness the Amir stressed. His Highness the Amir Sheikh Sabah Al-Ahmad prayed to Allah Almighty that the ongoing sincere endeavors and efforts would bring about the outcome to preserve the Gulf nations, and avoid whatever that might harm their solid ties or threaten their security or safety.

His Highness the Amir congratulated the Kuwaiti people, the Arab and Muslim nations on Ramadan, wishing them many returns of the occasion, with further glory and pride. His Highness the Amir urged the Kuwaiti people to abide by the teachings of Islam, renounce differences and hold onto and national unity, which is the “defensive fence” of the nation, as well as sticking to the constitution, which he described as “a source of pride”. He also called for maintaining the national consonants and elevated values that Kuwaitis inherited from their ancestors.

His Highness the Amir referred to the critical conditions sweeping the region, and the growing threat of terrorism worldwide. Unprecedentedly, the phenomenon has been spreading under various slogans and names, constituting a threat to countries and communities, and innocent people. His Highness the Amir Sheikh Sabah Al- Ahmad reiterated Kuwait’s solidarity with the international community against all forms of terrorism, to eliminate the menacing phenomenon, hoping for realizing security and stability around the globe. The fears and risks referred to require further caution and unity to maintain the security and safety of “our nation,” His Highness the Amir noted.

In the meantime, His Highness the Amir referred to Kuwait’s win of a non-permanent seat at the UN Security Council for two years, as of Jan 1, 2018. The Kuwaiti diplomacy has recently realized a distinct achievement, gaining the State of Kuwait further confi- dence from the international community, as the country has been elected as a non-permanent member at the UNSC, 2018-2019, His Highness the Amir said. “The election for the UNSC seat came in recognition of Kuwait’s prominent status and respect on the regional and international scenes, thanks to the country’s balanced and moderate foreign policy based on abiding by the UN Charter and the international law.

This has also rewarded Kuwait’s remarkable humanitarian role and participation in maintaining the international security and peace, besides lessening tension in areas of confl ict,” His Highness the Amir said. His Highness the Amir Sheikh Sabah Al-Ahmad highly appreciated the distinct role played by the foreign ministry to realize that success, and congratulated the Kuwaiti people on the historical achievement that to be added to a copious national record. In the meantime, His Highness the Amir voiced hope for further fruitful and constructive cooperation between the Legislative and the Executive Powers for directing efforts and capabilities to promoting the nation and realize people’s expectations. His Highness the Amir expressed pleasure for the inauguration of several vital development projects that contribute to improving the aspired public services. 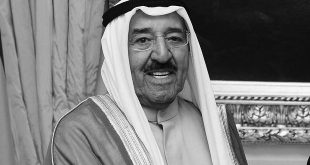 This post has been read 4509 times! “THE State of Kuwait and the entire world …