Flow to MENA up; remittances to Philippines dip

KUWAIT CITY, May 17: On May 12, the World Bank released a report showing that remittances from Kuwait in 2020 rose by nearly 20 percent compared to 2019 despite the Coronavirus (COVID-19) pandemic, reports Al Rai daily.

However, remittances from Kuwait to the Philippines decreased by approximately 5 percent in the last quarter of 2020 compared to the same period in 2019 due to lower oil prices and the repercussions of the Coronavirus.

Unlike Kuwait and Saudi Arabia, remittances from Qatar plunged last year compared to 2019, and also declined in the UAE.

According to the World Bank, the average cost of remitting $200 between countries in the Middle East and North Africa decreased in 2020, and remittances from Kuwait to Egypt was the cheapest within the region last year. In contrast, the remittance route from Jordan to Syria was the most expensive within this region.

On the other hand, the United States remained the largest source of remittances in 2020, followed by the UAE, then Saudi Arabia, and Russia.

Remittances to the Middle East and North Africa region grew by 2.3 percent to about $56 billion in 2020. This growth is mostly due to strong remittance flows to Egypt and Morocco.

Remittances to Egypt increased by 11 percent to a high record of about $ 30 billion in 2020, while flows to Morocco increased by 6.5 percent. Remittances also recorded an increase in flows to Tunisia (2.5 percent).

In contrast, other economies in the region experienced declines in remittance flows in 2020, with Djibouti, Lebanon, Iraq, and Jordan recording declines of more than 10 percent.

In 2021, remittances to the region could increase by 2.6 percent thanks to slight growth in the euro and weak inflows from the Gulf Cooperation Council countries.

As for remittance costs, the cost of remitting $200 to the region decreased slightly, to 6.6 percent in the fourth quarter of 2020. Costs vary widely between remittances routes as the cost of sending money from high-income of the Organization for Economic Co-operation and Development  (OECD) countries to Lebanon remained too high and exceeded 10 percent.

On the other hand, the cost of sending money from the Gulf Cooperation Council countries to Egypt and Jordan is about 3 percent through some remittance routes.

Despite the Coronavirus (Covid-19) pandemic, remittances remained resilient in 2020, registering a lower decline than previously indicated. The most recent World Bank summary on migration and development shows that officially recorded remittance flows to low- and middle-income countries reached $540 billion in 2020, just 1.6 percent lower than the total of $548 billion in 2019.

The decline in remittance flows recorded in 2020 was lower than the level recorded during the 2009 global financial crisis (4.8 percent). It was also much less than the decline in foreign direct investment flows to low and middle-income countries which – when excluding flows to China – fell by more than 30 percent in 2020.

As a result, remittance flows to low and middle-income countries exceeded the volume of foreign direct investment ($259 billion) and foreign development aid ($179 billion) in 2020. 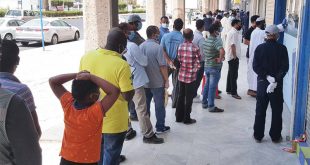 KUWAIT CITY, Nov 17: The remittances of Filipino expatriates in Kuwait have increased by $77.7 …