KUWAIT CITY, Dec 8: After the prices of private housing kept soaring until it reached sky high during the corona crisis, real estate experts said next year these prices should drop to between 20 and 40 percent, depending on the residential areas, supported by the principle of supply and demand, while others say private housing prices may continue to rise next year due to several reasons, reports Al-Qabas daily. One of the reasons, the daily quoting real sources say is the abundant “cash” fl ow, postponement of loan installments, low interest rates on loans, and individuals who find private housing a safe haven for their money, and prefer investing in the real estate market over other economic sectors in the country. Among the reasons, sources say, is the lack of optimism about the state releasing more plots of land in the short term, and this has encouraged speculators to switch to the residential sector instead of the ‘investment’ sector since the former is expected to bring in quick returns.

Suleiman Al-Dulaijan, a real state expert say calm will return to the private housing in 2022 but was quick to add, the prices of private housing during 2021 increased in some areas by approximately 30-40%, as happened in the fifth phase of Sabah Al-Ahmad Marine City, while it was lower in other areas, in which the increase was estimated between 20 to 30 percent, and those prices vary according to the region and location.

Mistaken
For his part, the head and official spokesman for the Al- Mutla’a Peoples Committee, Eng Khaled Al-Otaibi said the belief that private housing prices will fall during 2022 is a ‘mistaken belief’ citing various reasons. He stressed on the need for the private sector to participate in solving the housing problem, which in turn will lead to a decrease in prices in the private housing sector to acceptable levels, by working to implement government projects, so that all citizens can obtain their right to residential care, instead of devouring more than one-third of the salary to rent apartments in light of their inability to buy a ‘lifetime house’ or land to build on.

Al-Otaibi said that residential care plays a major role in reducing the prices of private real estate, by securing housing for citizens urgently through the implementation of projects in suburbs and very small areas whose implementation is quick and bears fruit, along with the distribution of houses in large cities or giant projects that require some time to complete. A real estate source told Al- Qabas the interior areas (close to the Capital) suffer from scarcity of land offered for sale, and not only the lack of supply, as the average price per square meter has increased in the areas of the capital governorate, including Shuwaikh residential, Abdullah Al-Salem suburb, Shamiya, Faiha, Adailiya, Kaifan, and others. The prices of private housing real estate witnessed significant jumps, rising to nearly 19% at the end of the third quarter of this year, compared to the same period last year.

Al-Shuwaikh residential topped the list of the most expensive residential areas in the Capital Governorate, with a rise of approximately 11%, with a range of 8.4% and 7.5% in Al-Nuzha and Granada, respectively, while the average price per square meter in private housing in the Hawalli Governorate jumped to 1,100 dinars, while it rose to 712 dinars in the Farwaniya Governorate according to recent real estate data. 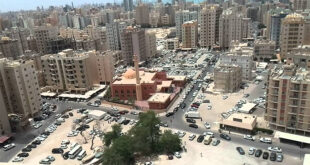