KUWAIT CITY, July 31: Undersecretary of the Kuwaiti Ministry of Interior Lieutenant-General Anwar Al-Barjas stressed on Saturday the necessity of readiness and vigilance in order to maintain the security and safety of places of worship and Husseiniyas and to overcome difficulties, given that protecting lives and public and private property is the priority of the security establishment and its leaders.

This came in a statement issued by the General Administration of Relations and Security Media after a field tour by Lieutenant-General Al-Barjas to some Husseiniyas, during which he met a number of field leaders “to review the plan for securing places of worship and Husseiniyas “ during the days of mourning. According to the statement, Lieutenant-General Al-Barjas from field commanders listened to the axes of the security plan implemented on the ground, the effective security deployment, the intense presence around the Husseiniyas, the smooth flow of traffic around them, and the overcoming of obstacles and difficulties to reach them safely.

He commended the effective cooperation between Husseiniyat-goers and security men, which contributed to the success of security and traffic deployment plans and had a great impact on everyone. Lieutenant-General Al-Barjas thanked and appreciated the men of the security establishment for their active role and sincere efforts in securing places of worship, stressing that they are the watchful eye for the comfort, security and safety of citizens and residents. For their part, the Hussainiyat leaders expressed their sincere thanks and appreciation to the security men for their cooperation, patience, vigilance, and their distinguished dealings with everyone. (KUNA)

Share
Previous More to join as women in security field hailed
Next Non-oil revenues increase by 41% in last fiscal year to reach KD 2.4b 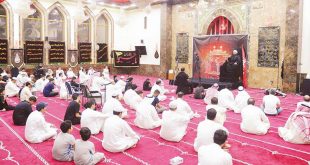