Private school fees up 3% annually – Resolution out in days

KUWAIT CITY, June 9, (KUNA): Minister of Education and Higher Education Dr Bader Al-Essa said on Thursday a ministerial resolution would be issued in the coming days to restore the old system of raising private schools’ fees by three percent annually.

Minister Al-Essa told KUNA, on sidelines of receiving students who won the International Robot Competition, that the ministry had issued a decision in this respect but it remained under study at the Parliament. He explained that the parliamentary educational affairs committee, examining the relevant decision, has not taken a decision yet.

The ministry now is inclining to hike the fees annually by three percent, Dr Al- Essa said. However, he indicated that the fees raise ceiling would be “open” in the future.

The decision will be applicable on new students and not those registered in the 2016-2017 scholastic year, the minister said, indicating that it might be issued in two days.

‘We’re still better off than Gulf’ 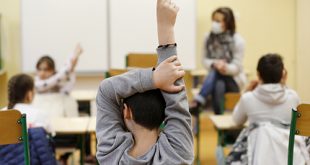 This post has been read 4790 times! Students, teachers required to wear masks FILE – …