KUWAIT CITY, April 26: Egypt’s Coptic Orthodox Pope Tawadros II has stressed the depth of relations between Kuwait and Egypt. Speaking at a news conference Tuesday while visiting the State of Kuwait for the first time since he was inaugurated in 2012, the pope said that the two nations “have one destiny. “For a long time, I have been looking forward to visiting the State of Kuwait which I have known through “Al-Arabi”, he told the conference, referring to the monthly magazine which has been in circulation for decades. “It was a gift provided by Kuwait for all intellectual people across the Arab world,” he added.

The Pope said: “I have liked Kuwait throughout the magazine, but today I like it very much when I visited it.” He extolled the reception of His Highness the Amir Sheikh Sabah Al-Ahmad Al-Jaber Al-Sabah, the Humanitarian Leader. “It was an honor to me to meet His Highness the Amir and some Kuwaitis,” the Pope noted. Commenting on the latest terror attack that targeted a church in Alexandria, and killed 11 people and wounded 35 others, he said the terror act has no relations with any religion, and will not affect the unity of Egyptians. On the contrary, it will reinforce this unity and love, he stated.

The Archbishop of the Coptic Orthodox Church Dr. Anba Antonios, priests, Coptic Church council members and congregation of Patriarch of the St Mark Coptic Orthodox Church in Kuwait held a dinner party in honor of the visiting Pope of Alexandria and Patriarch of the St Mark Church in Egypt, Pope Tawadros II. The event, which was held in Al-Masiya Lounge at Sheraton Hotel, was attended by several ambassadors, Members of Parliament, religious clerics, officials and a huge number of public and media figures.

In his speech, Pope Tawadros II affirmed that he will remember Kuwait with love when he returns to Egypt, and that his heart and mind harbor love for Kuwait, its Amir and its people. Pope Tawadros II said, “Kuwait is characterized by goodness, generosity of its people and its huge interest in issues concerning culture, as well as the care shown by His Highness the Amir Sheikh Sabah Al-Ahmad, the International Humanitarian Leader, towards the church, and all sects and religions living on the beautiful and peace-loving land of Kuwait — the land of peace, harmony and security”. Pope Tawadros II spoke about the love that every human need to be characterized with in all aspects, as the language of love is what enables human beings to understand one another.

During the event, former Minister of Information Mohammad Al-Sanousi emphasized his amazement about the Egyptian Copts, who, after their churches and congregations were bombed, continued to pray to God Almighty to forgive those behind such atrocities. Al-Sanousi stressed that extremism is found not only in terrorism but also in ideology, feelings of hatred, culture of “takfiri” and curricula that do not encourage creativity and acceptance of others. He affirmed that this historic visit of the Pope enhances the relations between the two friendly countries. Al-Sanousi explained that Kuwait is a land of love, and convergence of religions and people. It always welcomes icons and leaders of various religions and sects, which is a testimony of Kuwait’s tolerance and its endeavor to uphold and promote values of religious moderation. Meanwhile, Imam of Al-Muzaini Mosque Sheikh Hussein Al-Azhari said, “Muslims and Christians share many points of agreement.

It is not necessary for any crisis to divide us, but instead it is an obligation for us to unite and work together as one for the interest of the nation”. In addition, Head of St Marks Coptic Orthodox Church in Hawally Bishop Bijol Anba Bishoy said the generosity of His Highness the Amir of Kuwait is extended to everyone without exception, which is why he deserves the title of the “Amir of Humanity” and for Kuwait to be referred as the Capital of Humanitarian Work. He affirmed that the generosity of His Highness the Amir is globally witnessed. At the end of the event, Sheikh Ali Al-Jaber honored Pope Tawadros II with a token of honor, and the Palestinian Ambassador to Kuwait Rami Tahboub presented him with a gift of Palestinian heritage. 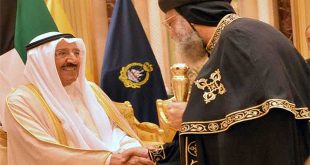 Ahmad-Al-Sarraf The Christians not only outnumber the followers of other religions, they are also most …