The agenda of these sessions include approval of the minutes of the previous session, complaints and petitions, incoming letters, and grilling motion filed by MPs Badr Al-Dahoum, Khalid Al-Otaibi and Thamer Al-Suwait against HH the Prime Minister Sheikh Sabah Al-Khalid.

The grilling motion consists of three points – violation of the Constitution due to lack of commitment to the parliamentary election results in forming the government, government’s domination over the formation of parliamentary committees and Assembly Office, and violation of Article 98 of the Constitution. This article states that “upon formation, every ministry shall submit its program to the Assembly and the Assembly may express whatever comments it deems appropriate thereon.”

Following are other items in the agenda:

■ Proposal to form a factfinding committee which will be tasked to investigate the fake citizenship issue,

■ Proposal to form a five member committee to investigate money laundering cases and connection of Kuwait to the Malaysian Sovereign Fund issue,

■ Reports of the parliamentary Foreign Affairs Committee on the military agreements of Kuwait with Turkey and Ukraine,

■ Reports of the Foreign Affairs Committee on the bill to approve the international treaty regarding communications, as well as the agreement between Kuwait and Morocco on marine navigation cooperation,

■ Bill on Kuwait’s approval of the nuclear energy agreement with the European Union,

■ Report of the Health, Social and Labor Affairs Committee on amending the relevant laws to replace the phrase ‘domestic worker’ with the word ‘servant’.

On the other hand, the Legal and Legislative Affairs Committee on Sunday finalized its reports on several important proposals as follows: establish a national company for producing and marketing agricultural crops, increase the children allowance of employees in the public sector, increase the incentive for citizens studying in colleges and institutes, and amend the relevant law to reduce the required age for Kuwaiti women to receive social allowance. 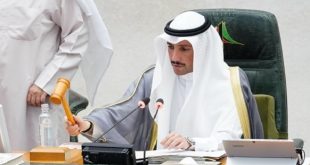