Philippine troops, backed by airstrikes and artillery fire, killed several militants aligned with the Islamic State group in a new offensive in the marshy heartland of the country’s south, the military said Tuesday.

Army Maj Gen Cirilito Sobejana said several key commanders, including a long-wanted Singaporean militant, were among the more than 100 militants who came under attack at daybreak Monday in the hilly hinterland near Shariff Saydona Mustapha town in Maguindanao province. One soldier was killed and seven others were wounded in the firefight in the village of Inaladan, where rocket-firing air force helicopters and bomber planes pounded a militant camp before army troops came in.

The militants split into groups and withdrew, Sobejana said. Sporadic gunbattles were continuing Tuesday as troops pursued the militants belonging to the Bangsamoro Islamic Freedom Fighters and the Dawla Islamiya, two small groups aligned with the Islamic State group. At least six bodies of suspected militants were found at the scene of the clashes, military officials said. Sobejana said up to 20 militants may have been killed but troops were still attempting to take full control of the camp, where most of the slain gunmen were hit by the airstrikes and artillery fire.

Troops were checking if Singaporean militant Muhamad Ali Abdul Rahiman, also known as Muawiya, along with local commander Esmael Abdulmalik, who uses the nom de guerre Abu Toraype, and bomb-maker Salahudin Hassan were among the wounded or slain militants, he said. “The objective is to eliminate these armed groups once and for all,” Sobejana said. (AP) 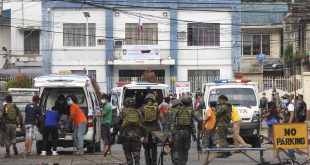