KUWAIT CITY, June 14: Some observers say they are not at all happy with the efforts made by the government to protect the citizens and residents from high temperatures and dust storms which happen every now and then through landscaping cities and governorates of Kuwait, reports Al-Qabas daily. They say the government efforts in this regard over the past years have failed to meet people’s expectations in spite of the fact that Kuwait is considered one of the hottest countries in the world, and one of the most affected by climate change. Studies indicate that the threat of global warming and declining air quality and other indicators call for urgent actions to adapt to future environmental risks. In light of the expectations of future dust waves this summer, the process of afforestation and greening is still progressing slowly, compared to the earlier demands of citizens and observers, who stress the need to increase the area of vegetation cover and combat desertification, while relying on windbreaks on highways, especially in the northern and southern regions.

Economic value
“We all remember what the Public Authority for Agriculture Affairs, years ago, did plant several rows of sidr trees as a barrier, to reduce the effect of wind on plants and various crops, protect the soil from erosion, reduce evaporation and conserve water, considering that sidr trees species are suitable for the local environment, and occupy the second place in terms of economic value after palm trees. During the past years, the authority continued its afforestation and greening campaigns according to the available capabilities, and concluded last December the activities of a campaign within the “agricultural season” by planting seedlings of trees in the Jaber Al-Ahmad area, and it was divided into two main parts, the first external, which is planting trees and covering the borders with green belts, and the second internal, planting and afforestation in the interior areas and streets, to protect the environment and mitigate the sandstorms affecting the country.

Despite the launch of more than one campaign recently to intensify afforestation and greening operations, the process is progressing slowly, and in August 2018, tweeters launched a “hashtag” campaign titled ‘People’s Campaign to Afforestation of Kuwait’, which witnessed a wide participation at the time, and each person participating in the campaign planted 200 seedlings within two hours, others also pointed out the importance of the participation of cooperative societies and private companies in supporting the campaigns. The sources highlighted six benefits of landscaping – helping improve the climate, reducing the temperature in summer, noise reduction, protecting the soil from erosion, reducing the glare of the sun’s rays and protecting cities from the dangers of wind rage. They also pointed to the three factors that can help stop the dust – increasing the area of vegetation cover, combating desertification and erecting windbreaks on highways.

Lack of budget
Some attribute the delay in launching extensive afforestation campaigns to lack of budget, lack of supervision over the implementation program, failure to follow up on maintenance work and ignoring the completion of irrigation operations All this happens when Kuwait is ranked as the Arab capital that is most vulnerable to heat, with an average temperature of 45 degrees Celsius during the three summer months with a maximum of 51 degrees, followed by Baghdad (between 44 and 50), Riyadh (43 and 49), Abu Dhabi (42 and 47), and Doha (41 and 47). This is in a recent analytical report by the Arab Gulf Center for Research and Studies, which was issued under the title ‘The Longest and Hottest Arab Summer in Decades: High Risks of Drought and Fires;” Khartoum ranked sixth with an average temperature of 41 degrees and 44 degrees as a maximum, Manama (38 and 45), followed by Muscat (37 and 46), Damascus (36 and 44), and Cairo (36 and 43). 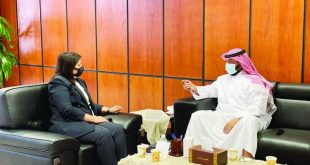