KUWAIT CITY, May 23: The report issued by the Forensics Department confirms that the American teacher whose corpse was found in her apartment in Hawalli area, had died about a week before her death was reported and that she died due to a health problem and there was no foul play.

A security source told that a friend of the deceased, who is 26 years old, told the security authorities that she used to frequent her apartment, and that the deceased had told her that she was sick and needed medicine and even gave her the prescription because she was unable to buy.

She added, she visited her friend’s apartment three times over ten days, and since there was no response, it raised her fears, especially that had not left the country, and was communicating with her school electronically.

The source stated after the Operations Room of the Ministry of Interior received a report securitymen after obtaining permission from the competent authorities to open the apartment and they were met with the unpleasant smell coming from the partially decomposed corpse of the teacher. 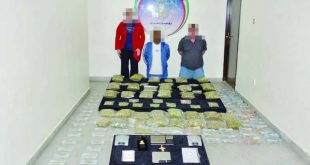