The director general was speaking during a virtual English language conference and the authority maintained a copy of the entire conference for reference, denying the project has been completely suspended. Sheikh Yusuf Al-Abdullah said that work on the project was suspended from the construction aspects only. Statement pointed out that the Director General of Ports Authority reviewed the upcoming projects of the authority that fall under the 2035 development plan, and did not mention the Mubarak Port project due to its lack of affiliation to Kuwait Ports Authority.

The authority indicated the translation of the dialogue from English language was done in an inaccurate manner, which caused a change in meaning and confusion, noting the image that was circulated as belonging to the Mubarak Port is in fact the Khalifa Port located at Abu Dhabi in the United Arab Emirates. Public Relations Department of the authority appealed to all media outlets and the news sites on social media to ensure the accuracy of news and statements of officials by verifying from their official sources. 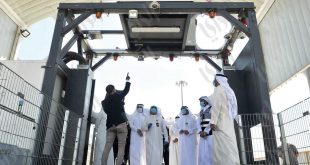