KUWAIT CITY, Nov 6: The horse Mujrayat from Nashma Stable came first in the 1,400-meter race for junior horses, ending the race in 4:28:1 minutes. In second place was the house Ghaladdah from Kaifan Stable ridden by Yousef Muhammad, and the horse Fuad from Al-Jufaidan Stable ridden by Wahabi in third.

Head of Kuwait Equestrian Club Sheikh Dari Al-Fahd and Sheikh Sabah Fahd Al-Nasser presented the awards to the winners and congratulated them.

Leader and Trainer in Nashma Stable Sheikh Jaber Al-Ali Al-Hamoud expressed his happiness over the horse Mujrayat’s victory in the race especially since the horse joined the stable just one week ago.

In the Mubarak Al-Kabeer Club’s inauguration race of 1,600 meters for all categories of horses, the horse Tawfiq from De’eia Stable ridden by Ali came first within 2:44:1 minutes, followed by horse Medbaj owned by Muhammad Uwaed Al-Hamdan and horse Al-Ansar from Al-Osaimi Stable in second and third places respectively.

Share
Previous …and is there any solution for this?
Next WBT-PBA 13th Kuwait Int’l Open concludes 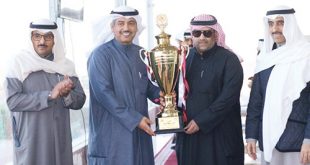 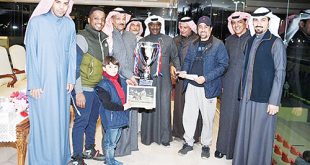 This post has been read 5601 times! A young man in Hail area of Saudi …