KUWAIT CITY, July 20: Ministry of Public Works seeks to absorb about 950,000 workers in labor cities, and prefer the construction of cities remain through the private sector, reports Al-Qabas daily. At meetings attended by several bodies in the state in this regard, the ministry touched on four options for implementing the workers cities project.

The first of which to be carried out through the ministry, the second by Public-Private Partnership Projects Authority, the third by the ministry and the partnership authority, and finally to assign the ministry to implement projects in conjunction with a government agency designated by the Council of Ministers.

The ministry concluded that it is necessary to adhere to Cabinet Resolution No. 1568 adopted at its meeting No. 51/2011/2 dated 31/10/2011 regarding companies contracting with government agencies housing their laborers in the labor cities.

The technical staff have been assigned to study development projects and initiatives in coordination with both the Ministry of Finance, and the Department of Fatwa and Legislation to take appropriate legal and contractual measures to implement this decision.

Proposed
The ministry has proposed additional solutions for the phenomenon of overstocking labor through adherence to the conditions and regulations contained in the ministerial decisions regulating labor housing and the health conditions set by the competent authorities.

This will be subject to periodic inspection, commitment to regulatory decisions regarding building percentages for labor housing in industrial lands, and the possibility of providing permanent housing for oil sector workers on lands belonging to the sector. This is to find a quick solution to the expected labor with the proximity of a number of future projects in the southern region, and to allow nonmega construction projects to build temporary on-site labor accommodation during the project, according to the site conditions.

The proposed solutions also included allocating places in the residential areas for laborers working in public buildings such as “outposts – schools – cooperative societies – polyclinics.” These housing should be managed by consumer cooperative societies in each region with 100,000 employees. The Ministry of Public Works shall repeat the experience of building workers’ housing on an area of 10,000 to 100,000 square meters that can accommodate between 1,000 to 10,000 people, in places such as Shadadiyah and Sabhan, provided that these sites are near the vocational industrial areas (Shuwaikh Industrial – Jahra Industrial).

Execution of the housing units and their management should be done by the private sector. It also called for the possibility of specifying one body with the responsibility of implementing the workers’ cities, and organizing and following special requirements in this regard, and linking the civil card address with the residential address, including linking all legal and administrative obligations as it is applied in the “Court – Supply – Cooperative …”

The ministry’s recommendations:
1. The aggregated database is sufficient to qualify for offering.
2. The site was chosen, studied and inspected.
3. The project is easy to implement, and the budget spent on it is not equal to the amount of spending resulting from the effects of the delay in completing this project.
4. The cost, even if it seems high, is divided into 7 years, which equals 100 million a year.

Observations
After reviewing the opinions and observations of the concerned authorities, the Ministry of Public Works concluded on the following:

First: The non-establishment of the labor city in the south of Sabah Al-Ahmad, due to the reservation of the Ministry of Interior and the Oil Sector.

Second: Allocating lands for the oil sector KIPIC – KNPC to be close to work sites, and allowing KOC to establish permanent labor housing sites within the limits of their sites, in coordination with the Kuwait Municipality and the Ministry of Electricity and Water.

Third: The need to study and analyze the targeted workers (celibate with a salary of less than 200 dinars per month) and the estimated number of 950,000 workers to determine extent of the need to establish labor cities to accommodate them.

Fourth: Studying building a suitable site from previously approved sites or any other site to accommodate the remaining workers.

Fifth: A number of lands are allocated, which are close to the labor dominant sites (five regions), and the construction of houses sufficient for a total of 100,000 workers, so that they are close to the services and do not need to implement an infrastructure.

Sixth: It is preferable to build workers’ cities through the private sector (the third and fourth model) and not to charge them to the state budget unless there are reasons that could delay implementation (changing laws and legislation).

Seventh: To study the alternatives currently available in the informal labor housing (Jleeb Al- Shuyoukh, etc.) in the event of the application of the law prohibiting accommodation of workers in residential areas, and the extent to which this can be implemented immediately or after the implementation of labor cities.

Eighth: Amending the special specifications in government contracts to ensure control of the number of workers assigned to each contract and the application of appropriate housing requirements and a review of the exceptions given in this regard. Ninth: Commissioning the Public Authority for Housing Welfare to implement the fifth proposal in new cities, and assigning the Kuwait Municipality to secure spaces in inhabited labor areas. Four options for implementing workers’ cities were proposed by the Ministry of Public Works.

The second stage delivers the project to the partnership body for offering to the investors, according to the rules and regulations, taking into account increase in the absorptive capacity and expansion of commercial, recreational and service activities in the project.

Positives: Lower cost to the investor. More incentive for the investor. Negatives: The cost of the infrastructure to be borne by the state.

The fourth option: The Ministry of Public Works and a government agency, which the Council of Ministers considers mandated.

The first stage: the infrastructure of the project is fully implemented, through the Ministry of Public Works and equipping it as investment lands.

The second stage: the lands are given to the authority that the Council of Ministers deems mandated to sell these lands to the beneficiary companies, taking into account the criteria for adequate housing, according to regulations, to be agreed upon. 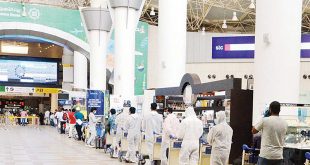 No shortage of local workforce, can do without expats

Expatriates may not flee Gulf in droves

KUWAIT CITY, Dec 12: Expats might not flee the Gulf in the numbers predicted earlier …