Observations
The Undersecretary of the Ministry of Interior listened to the observations and suggestions of representatives of Husseiniyas, and many questions and inquiries were asked and answered with transparency and clarity, praising their cooperation during the past year and the application of health and preventive requirements, wishing everyone more cooperation to serve public health. In this regard, he called on the owners of Husseiniyas to follow the instructions and abide by the laws and security and health guidelines and social distancing inside and outside Husseiniyas in light of the circumstances the country is going through in the face of the spread of COVID-19, stressing the need to cooperate with the security men who will be present permanently during this period to facilitate the Husseiniya visitors. He conveyed to them the greetings of Interior Minister Sheikh Thamer Ali Sabah Al-Salem Al- Sabah, thanking the owners of Husseiniyas and their patrons for their cooperation and constant communication with the Ministry of Interior. For their part, the Husseiniyat representatives praised the efforts of the security men, expressing their thanks and appreciation to the Ministry of the Interior and the security leaders for their efforts that are in the public interest and preserve the security and safety of the homeland. (KUNA) 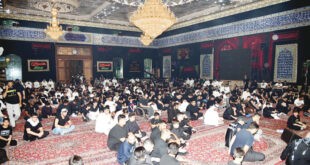