KUWAIT CITY, Sept 11: Minister of Information and Culture, and Minister of State for Youth Affairs Abdul Rahman Al-Mutairi has expressed pride for the accomplishments made by Kuwait’s athletes at Tokyo 2020 Paralympic Games. Speaking to reporters on Thursday after receiving the Kuwaiti delegation to the Tokyo 2020 Paralympic Games, the minister said that Ahmad Naqa’s winning of the silver medal in 100-m race and Faisal Sorour grabbing the bronze medal in the shot put contest at this big global event mirrored the brilliance of Kuwait’s Paralympic athletes.

Progress This progress was the fruit of the continued support provided by His Highness the Amir Sheikh Nawaf Al-Ahmad Al-Jaber Al-Sabah and His Highness the Crown Prince Sheikh Meshaal Al-Ahmad Al- Jaber Al-Sabah to Kuwait’s sports, he said. He noted that the government is keen on translating this backing by providing all facilitation to Kuwait’s athletes, in cooperation with their federations and clubs, to help them continue excellence and creativity in all sports. He congratulated the players and those responsible for the Kuwaiti Paralympic sports on this good achievement that made Kuwaiti people happy. Meanwhile, Naqa said he dedicated his medal to Kuwaitis, promising them to do his best so as to win the gold at Paris 2022 Olympics. Sorour shared Naqa’s view regarding the next preparations for the Paris games, saying he won the bronze despite unstable weather conditions at that time (KUNA). 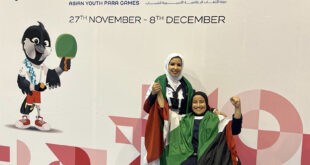 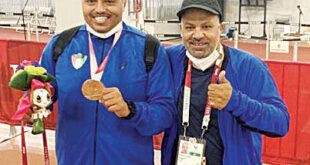