PARIS, Aug 11, (AP): Lionel Messi said he’s “in the right place” to win another Champions League trophy and cited a reunion with Neymar as a key factor in his decision to sign with Paris Saint-Germain. The 34-year-old Argentina star spoke at his introductory news conference at Parc des Princes stadium on Wednesday, the morning after signing a two-year deal with the option for a third season after leaving Barcelona. “My goal and dream is to raise another Champion’s (League Trophy) and I believe that I am in the right place to have the best chances to achieve that,” Messi said. “When you see this squad, you really want to play with them because there are so many possibilities,” he added. “We have the same goal. And Neymar of course did a lot and was important for my choice.”

Qatari-backed PSG have been desperate to win the Champions League, falling just short when they lost the 2020 final to Bayern Munich. Messi helped Barcelona win four Champions League trophies. Messi’s arrival gives PSG formidable attacking options as he links up with not only Neymar – his former teammate at Barcelona – but also France World Cup winner Kylian Mbappe. “I’m going to play with best players, it’s very nice, it’s incredible to be able to experience this,” said Messi, who also cited Argentina teammates and PSG players Ángel di Maria and Leandro Paredes. “Obviously, one of the reasons (I came) was the locker room: Neymar, Dí María, Paredes, whom I know.” Messi said he is “ready” to start playing with PSG, which host Strasbourg on Saturday night. “When I feel it, when the staff thinks I’m ok, I’ll be ready. I’m willing to play,” he said. Messi became the most high-profile free agent in soccer history after his attempts to stay at Barcelona were rejected last week by the Spanish league because the salary would not comply with financial regulations, with the Catalan club burdened by debts of more than 1.2 billion euros ($1.4 billion).

PSG moved quickly to sign the Argentina star. The team, Messi said, “positioned themselves and everything went really fast and it was easy. It happened in little time. It was a difficult situation and they were efficient.” PSG coach Mauricio Pochettino quickly made contact with his fellow Argentine after Barcelona announced last Thursday that Messi would be leaving the club he joined as a 13-year-old boy. Messi won every major honor with Barcelona and was granted a tearful exit news conference on Sunday to signal the end of an era. Only Cristiano Ronaldo in the current era challenges Messi’s status as an all-time great. While PSG had to pay 222 million euros (then $261 million) to sign Neymar from Barcelona in 2017, there was no transfer fee for Messi. No salary details were given, but a person with knowledge of the negotiations earlier told The Associated Press that Messi is set to earn around 35 million euros ($41 million) net annually.

The person said on condition of anonymity before the contract was signed. PSG will be hoping not only that Messi helps the team regain the French title they lost to Lille last season but finally win the Champions League. Paris Saint-Germain president Nasser Al-Khelaifipraised “a historic day for the club, football world and it is a fantastic moment for us.” “Everybody knows Leo… He makes the football magic, beautiful and he’s a winner. It will be very exciting for our supporters and the fans worldwide,” he added. ”We have big ambition.” Messi said it was “very hard” to leave Barcelona after so many years but added “the moment I arrived here I felt very happy.” PSG supporters have seen their club transformed over the last decade since the infl ux of Qatari sovereign wealth investment linked to the emir. Once Messi’s Barcelona contract expired – and the Catalan club was unable to afford to keep him – PSG was one of the few clubs that could finance a deal to sign the six-time world player of the year. Messi will wear the No. 30 jersey – the same number he wore in his first two seasons with Barcelona before switching to No. 19 and then the prized No. 10, which Neymar gets to keep at PSG. 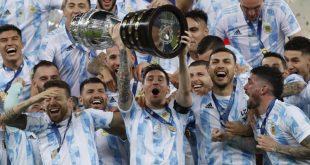 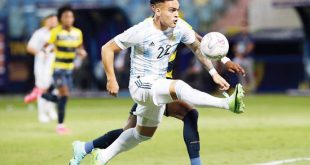 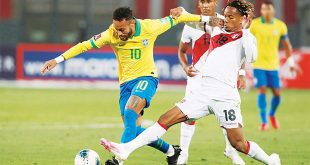 MADRID, Sept 3, (AP): Staying with Barcelona may be an option for Lionel Messi after …