JAKARTA/ISLAMABAD/CAIRO, Nov 9, (Agencies): Many Muslims around the world expressed dismay on Wednesday at Donald Trump’s election as US president, saying they feared it might raise tensions between the West and Islam and contribute to radicalisation. While Egypt’s president made an early congratulatory call to Trump, ordinary Muslims were worried that his victory would be a propaganda gift to jihadist groups.

Others were apprehensive that the president-elect will implement campaign pledges to clamp down on Muslims entering the United States. “Trump has espoused highly infl ammatory rhetoric against Muslims. Voters there will expect him to fulfill his promises. That makes me worry about the impact on Muslims in the US and in the rest of the world,” said Yenny Wahid, a prominent mainstream Muslim figure in Indonesia.

The world’s 1.6 billion Muslims follow a multitude of sects and schools of thought, constitute a majority of the population in countries as varied as Indonesia, Pakistan, Saudi Arabia, Senegal and Albania, and hold a vast array of political views. Yet Trump’s previous comments about Muslims, that those from abroad should be barred entry or intensely scrutinised beforehand, and the presence of vocal anti-Islam activists among his supporters, has alarmed many. Egyptian President Abdel Fattah el- Sisi was the first world leader to congratulate Trump on the phone, Sisi’s office said. Many other Egyptians also welcomed his victory, saying his opponent Hillary Clinton’s record in office had won her few friends in the most populous Arab country. Clinton, Secretary of State during the 2011 Arab Spring uprisings, is unpopular with many Egyptians.

Many of those who backed the revolt saw her as a long-standing supporter of Hosni Mubarak, the autocrat they toppled from power. But elsewhere, other Muslims saw Trump as a hostile figure. Some Muslims, including Wahid, said they feared his election as president might encourage a view that the United States held enmity for Muslims and that this would hinder efforts in Islam to counter radicalisation. In jihadist social media forums, militants said Trump’s election had merely revealed the true position of the United States towards Muslims.

“The masks have slipped,” one wrote. But some other Muslims were more hopeful, including Umer Daudzai, former Afghan minister of interior, citing the record of Ronald Reagan who was US president from 1981-89. “Ronald Reagan ended the Cold War. I hope Donald Trump will end all wars and become hero of peace in the world,” he told Reuters. Among some officials, there were also expressions of concern but the Organisation of Islamic Cooperation (OIC), the body that represents Muslim states, issued no statement early on Wednesday. In Indonesia, the most populous Muslim nation, an official from the faith’s top clerical body there said Trump’s election could create new tension between the United States and the Islamic world.

Comment
Saudi Arabia, a US ally that is both birthplace of Islam and home to its holiest places, issued a statement that it had congratulated Trump on his election win without making further comment.

However, Awad al-Qirni, one of its most popular clerics with a Twitter following of two million, said in a social media post after the election – but without referring to Trump directly – that “America declines into collapse” and that “its internal crisis will grow severely”. In Pakistan, Sherry Rehman, a senator and former ambassador to Washington, said Trump’s proposal last year to bar Muslims from entering the US had disturbed many.

And in Bangladesh, a government official who asked not to be named said: “I can’t think what awaits us. Donald Trump was talking about fighting against Muslims. Are we going to see more wars?” Meanwhile, “I’m very afraid, will there be more wars? Will America attack Muslim countries again?” asked Indonesian activist Alijah Diete, as Muslims reeled Wednesday from Donald Trump’s shock US presidential election victory.

After a bitter campaign in which fiery anti-Muslim rhetoric was central to Trump’s populist strategy, many Asian followers of Islam were dumbfounded that Americans had chosen him to lead the world’s greatest power. With markets in a tailspin and the world looking on in shock, there was growing anxiety in Pakistan, Indonesia and Bangladesh — home to more than a third of the world’s 1.5 billion Muslims — about what his dramatic election win would mean for the Islamic world. Worried followers of the faith listed a litany of problems for Muslims they believed would come with a Trump presidency — from the billionaire following through on a pledge to ban Muslims from entering the US, to a potential surge in Islamic extremism driven by tougher American policies. “Americans have just screwed the world yet again,” said Syed Tashfin Chowdhury, a Bangladeshi who has several close friends in the US. Thousands in the country watched in shock as the results rolled in and Facebook lit up with horrified reactions. “I’m in disbelief,” said the Indonesian Muslim activist Diete, 47. “I thought Americans are supposed to be intelligent and mature. How is it possible Donald Trump won?” Trump appealed to America’s disillusioned white majority with populist pledges to tear up free trade deals and deport illegal immigrants, but it was his attacks on Islam that sparked some of the greatest anger abroad and drew accusations of xenophobia and racism.

He made his most controversial remarks last December, shocking the Islamic world by calling for a “total and complete shutdown” of Muslims entering America after an apparently radicalised Muslim couple carried out a mass shooting in California. Following his improbable election victory Wednesday, anger and anxiety were again high among Asia’s Muslims. A senior Pakistani government offi- cial, speaking anonymously, called the news “absolutely atrocious and horrifying” while others in the country also lamented the results. “I am disappointed to see Donald Trump winning because Hillary Clinton is a good woman, she is good for Pakistan and Muslims all over the world,” said Ishaq Khan, 32, speaking at an Islamabad market. “She was talking about world peace — but Trump was talking about fighting against Muslims.” 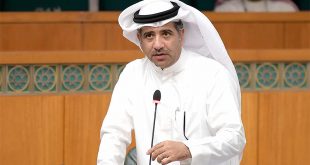 This post has been read 5111 times!WASHINGTON, Nov 14 (KUNA) — US President-elect Donald Trump …