KUWAIT CITY, Nov 17: Free bus transportation will be offered from and to Mubarakiya area via four stops throughout the capital district, said Kuwait Public Transport Company (KPTC) Wednesday. CEO of KPTC Mansour Al-Saad told KUNA, during the opening ceremony of the service attended by governor of the capital district Sheikh Talal Al-Khaled Al-Sabah, that the service will operate from 10:00 am to 10:00 pm local-time with bus trips available every 30 minutes.

The four stations will be situated in the parking lot of Sharq Mall, the yard near Jahra roundabout and the Sheraton hotel, Sanabel complex, as well as the ministries area in Mirgab area, he revealed. Al-Saad added that the service will run until March 2022 and it will be renewed if there was considerable demand. Hopefully, the service will lessen traffic jams at Mubarak area, indicated the KPTC CEO, pointing out that the buses, included in this service, would be unique in shape, color, and passengers capacity (KUNA) 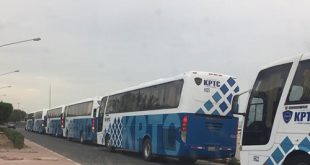